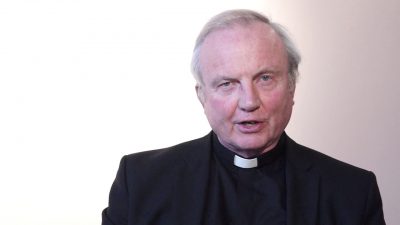 Bishop Donal McKeown of Derry sent a strong message of affirmation to Catholic educators, telling over 800 of them that Catholic schools “do not seek merely to offer a good secular education with a bit of RE fluff on the side”.

“Some challenges come from those who criticise the existence of faith-based schools and who would prefer that education could be the only area of society where we don’t have choices.”

Other challenges, he said, arise from the social realities that all schools now face.

“In the growing absence of a cohesive society that helps to socialise young people, schools are expected to fill the gap in all sorts of areas of human growth. In that context, schools can become the battleground for competing value systems.”

The Bishop, who is a member of the Irish Bishops’ Council for Education, stressed that worthy words are not enough unless the school community is explicitly committed to creating an environment where an alternative worldview is made concrete. “That applies in how we celebrate achievement, how we support the less gifted, how we deal with disputes,” he said.

Catholic education sets very high standards not just for the academic success of its pupils but also for the sort of mini societies that they model in their school communities, the bishop said.

“IT equipment can help the acquisition of knowledge and skills – but it takes people to help form idealistic and generous young people. The heart of leadership does not lie in more efficient systems but in the hearts of leaders,” Dr McKeown told conference participants from the primary and post primary sectors.

He explained that like so many of the great founders of religious congregations and local parish communities down through the centuries, in 2019 Catholic educators seeks to offer education to young people so that they can both cope with the tough realities of life and work to change a dominant culture that crushes too many people all around the world and in their diocese.

The big killer in this country, he reminded delegates, “is not political violence but rather the hopelessness and meaninglessness that come from the ludicrous message that more freedom alone will make for a happy and wholesome society.”

Elsewhere in his opening address to the conference which was themed “The path I walk, Christ walks it”, the Bishop of Derry said he believed that criticism of Catholic education will continue to grow, “not because we are doing a bad job, but because we are doing such a good job of daring to speak a counter-cultural message into our society.

“We will increasingly be condemned for being heretics if we are crazy enough to speak openly about love, community, forgiveness, virtue, family and responsibility rather than just grades and famous past pupils.

“Many will shout for our removal if we are brazen enough to speak of a God who gives meaning to our lives whether we are rich or poor, glamorous or frail, hero or villain.”

But he stressed, “If we are not a prophetic voice in our society, the path we walk is not the one that Christ walks.”

Discussing the purpose of Catholic education, he said it should be equipping the next generation to bring God’s love and mercy into an often harsh and dangerous world.

“The antagonistic approach of many politicians, the unsustainable depredation of the physical environment and the fragmentation of the human environment – all of these can be changed if young people can be helped by inspiring schools to be architects of a better future and not just prisoners of a painful past.”

That involves, Dr McKeown said, a formation on the responsible use of freedom and a cultivation of the virtues that call people to heroism and not just to the lowest common denominator.

“It means campaigning for the value of learning for its own sake. It means modelling a way of education where learning is not a commodity to be fought over but a journey to be savoured, a journey where none of us is as smart as all of us.”