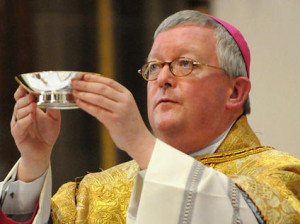 The possibility of wider sharing of Communion between Roman Catholics and Anglicans has been raised by one of the most senior Catholic bishops responsible for dialogue with the Anglican Churches.

In an interview with the Church of Ireland Gazette, Archbishop Bernard Longley of Birmingham, Co-chairman of the Anglican-Roman Catholic International Commission (ARCIC), suggested that the Catholic Church might allow Anglicans to receive the Eucharist.

Stressing that he was speaking in a personal capacity, Archbishop Longley said that the inability of Catholics and Anglicans to share in Communion causes a “pain” that ecumenical work strives to resolve.

The Archbishop referred to the 1993 Ecumenical Directory, which says that Anglicans and non Roman Catholics may receive Communion under certain extraordinary circumstances, including if they are in danger of death.

Asked if there could be room for further changes, Archbishop Longley said, “My personal view is, you are right to draw attention to the changes which we have already seen on the basis of a deeper theological understanding of one another’s Churches.”

That policy, he said, represented “a very significant step away from the impossibility to the limited possibility.”

“And on that basis, the 1993 Ecumenical Directory made possible the reception of Holy Communion by the baptised who are not members of the Roman Catholic Church in a number of specified circumstances and with certain criteria.”

“Given that that represents a change and a very significant shift away from the impossibility to the limited possibility then I could imagine and foresee one of the fruits of our ecumenical engagement as moving towards a deeper understanding of communion and a deeper sharing between our churches … which perhaps would lead to a reconsideration of some of the circumstances.”

He added that it was impossible for him to predict the “speed of change” but that he hoped existing rules could be made use of.