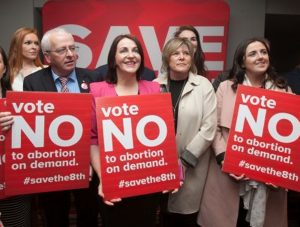 As the ‘Save the 8th’ campaign was officially launched on Thursday in Dublin, plans were already in place for a series of rallies which will take place across Ireland in the coming week.

Stand Up For Life Rallies will take place in Donegal, Athlone, Galway, Limerick and Cork, beginning on Easter Monday. According to Cora Sherlock from the Pro Life campaign, there is a great enthusiasm for the nationwide rallies. “They are enthusiastic because they see the rallies as an opportunity to motivate and encourage people locally, which is something different than what you do in Dublin. People are canvassing around the country and this is a chance for them to come together and meet in their local area.”

The first of these regional gatherings takes place on Easter Monday, 2nd April, at the Great Northern Hotel, Bundoran at 3pm.  On Wednesday, 4th April there will be a rally at Athlone IT, at 6pm.  On Thursday, 5th April, it will be the turn of Galway, where people will meet at Leisureland, Salthill at 6pm. Friday 6th April, the gathering will be at Limerick at the Racecourse at 6pm and next Saturday, 7th April, there will be a pro life rally in Cork, at Grand Parade at 3.00pm.

The PLC has asked people intending to come along to any of these gatherings, to register beforehand if possible. “The purpose of registering is to give us an idea of numbers coming so we know we have enough seats,” Cora Sherlock told CatholicIreland, “but people are welcome to come along on the day even if they haven’t registered – it won’t make a difference.”

Commentators agree that the referendum will be lost or won in Dublin. The Love Both campaign is also planning a rally for the capital, on Saturday, 12th May, at 2pm. “What we are doing in Dublin is similar to what we are doing around the rest of the country, which is to try and make people aware as much as possible of what is on the table, which is abortion on demand, which has been hidden to some extent or hasn’t got the airing that it needs,” said Ms Sherlock.

The guest speaker at the first five Stand Up for Life rallies will be Claire Culwell, an abortion survivor. “She survived the abortion that ended the life of her twin so she is very well placed to talk about the reality of abortion and the reality of what it would mean if the Eighth Amendment was repealed.

Claire was adopted by a loving family, made the personal journey to reconnect with her biological mother later in life, and according to LoveBoth, today “speaks out for vulnerable young women and babies in the womb who are at the same risk of abortion that she faced”. 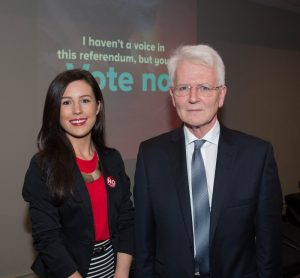 Ms Sherlock appealed to Irish people to “put the final push on” in the coming weeks.

“We are in the run up to the referendum now that the date has been set [25th May].  These rallies next week are a chance for the people to come along and find out what is the best way of spending the next eight or  nine weeks before the referendum to ensure we get a no result on the day.”

On Thursday, the official ‘Save the 8th’ campaign was launched in Dublin.  Campaigners included members of the Oireachtas and healthcare professionals. At the launch, Doctor John Mongahan said repeal of the Eighth Amendment will “not

make women safer in pregnancy but will only change how politicians may legalise abortion” and ten young women spoke about their personal experiences with pregnancy, including dealing with babies with foetal abnormalities. A woman whose mother had considered abortion in the 1990s said “If abortion was local and easily accessible, I may not be here today.”