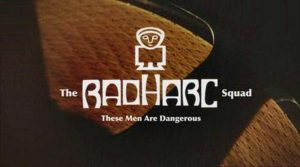 The Radharc Trust this week invited television directors to enter their documentary films of outstanding quality, in the spirit of Radharc, for the Radharc Awards 2016.

The awards will be presented on 20 October 2016 in the Talbot Stillorgan Hotel, Mount Merrion, Co Dublin.

The Radharc Awards were established in 2002 to honour the memory of Fr Joe Dunn and Radharc’s achievements in religious affairs programmes for Irish television from 1962 to 1997, and to encourage similar quality documentary production in Ireland today.

The Awards are presented every two years to the producers of television documentaries of outstanding quality, that address national or international topics of social justice, history, morality and faith.

There is an additional award for similar short documentaries produced for digital media. The producer of the winning production in each of the two categories will receive a bronze Radharc trophy.

Decorative scrolls for productions that are highly commended will also be presented.

The Category One awards are for documentaries broadcast between Saturday 20 September 2014 and Tuesday 13 September 2016 on any free to air channel on the island of Ireland.

Category Two: An award for non-broadcast documentaries produced during the same period for digital media with a maximum length of 15 minutes.

The closing date for the receipt of all entries is Friday 16th September 2016.

In a statement, the Radharc Trust say the entries must be a documentary of high artistic merit that addresses subjects such as national or international topics of faith, morality, social justice, human rights, history, religion or heritage.

Programme makers may belong to any or no religious group but the programme itself should portray positive human values and challenge the moral conscience of the audience.

The tone of the documentary should reflect the ethos that motivated Radharc Films.

One copy of the documentary production must be supplied on DVD and is non-returnable.

It must be posted or delivered to:  Radharc Awards 2016, The Radharc Trust, 18 Newbridge Avenue, Sandymount, Dublin 4.

A second copy may be sent in, if so desired, by Dropbox. Entry Form, Summary, Synopsis, and Publicity Photograph may be posted to the same address or submitted to [email protected]