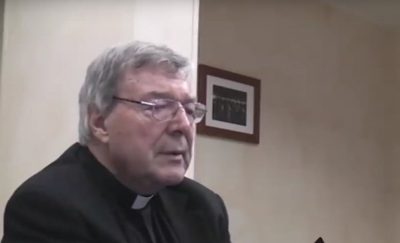 The Australian Cardinal who was convicted of child sex abuse is appealing his conviction, and says the prosecution case against him is flawed.

News of the conviction of Cardinal George Pell made headlines worldwide last week, not least because he is the most senior clergyman ever to be convicted of child sex abuse. The former of Archbishop of Sydney was once head of finance at the Vatican, where he was reckoned to be the church’s third most senior churchman.

There have been a number of abuse allegations made against the Cardinal since 2002, but these prosecutions did not go ahead because corroborative forensic evidence was not available. While these allegations put the Cardinal’s reputation under a cloud, he has until now remained legally innocent of any charges against him.

In the cardinal’s appeal, his barrister, Robert Richter QC, said the conviction is unsafe on several grounds.

The first ground is that it was not open to the jury to be satisfied beyond reasonable doubt on the word of the complainant alone.

Supporters of Cardinal Pell have argued that the allegations made do not sense. Cardinal Pell was not in the habit of going to the sacristy straight after Mass, as it was his habit to spend time with members of the congregation at the doors of the cathedral; and when the Cardinal did go to the sacristy he was, typically, accompanied by the master of ceremonies and the sacristan, so that it was very unlikely to be alone in that room with the two boys.

In the court case, the master of ceremonies, Msgr Charles Portelli testified that that he was with Cardinal Pell the whole time.

The second ground for dismissing the conviction given in the appeal is that court procedures in the case were flawed: “There was a fundamental irregularity in the trial process, because the accused was not arraigned in the presence of the jury panel as required,” Mr Richter said.

Dismissal on this technical ground would see the Cardinal declared legally innocent, but with a tarnished reputation in the eyes of many.

The third grounds for dismissal relates to a decision by County Court Chief Judge Peter Kidd not to allow the defence to show the jury a video of the vestment garments worn by the cardinal in Mr Richter’s closing address. The judge upheld the prosecution’s argument that the video amounted to new evidence, and new evidence may not be introduced during a closing address.

Mr Richter argued in the appeal that the video was a visual representation of arguments made in the trial that it was impossible for the Cardinal to simply move the garments to one side to expose his private parts.

Victoria State police have released a video of the cardinal being questioned in October 2016 when the allegations were put to him, in which he denied everything and said: “What a load of garbage and falsehood, and deranged falsehood.”

The Cardinal was tried twice on the charges before being found guilty. The first was ruled a mistrial because there was a hung jury – to avoid being a trial being declared a mistrial, Australian law requires a unanimous verdict. The second trial concluded on 11th December  last year, but reporting restrictions weren’t lifted until the sentencing hearing took place last week.

News of the conviction has left many Australian Catholics hurt and confused. Some believe the allegations against Cardinal Pell; others believe he is the victim of a growing mood of anti-Catholicism in Australian society.

Archbishop Mark Coleridge of Brisbane, who is president of the Catholic Bishops of Australia, has called on the faithful, and on others, to await the outcome of the appeal. In a released statement, he said: “The news of Cardinal George Pell’s conviction on historical child sexual abuse charges has shocked many across Australia and around the world, including the Catholic Bishops of Australia.

“The Bishops agree that everyone should be equal under the law, and we respect the Australian legal system. The same legal system that delivered the verdict will consider the appeal that the Cardinal’s legal team has lodged. Our hope, at all times, is that through this process, justice will be served.

“In the meantime, we pray for all those who have been abused and their loved ones, and we commit ourselves anew to doing everything possible to ensure that the Church is a safe place for all, especially the young and the vulnerable.”

Cardinal Pell’s successor in Sydney, Archbishop Anthony Fisher, also counselled a “wait and see” approach in his homily on Sunday.

He said: “If we are too quick to judge, we can end up joining the demonisers or the apologists, those baying for blood, or those in denial.”