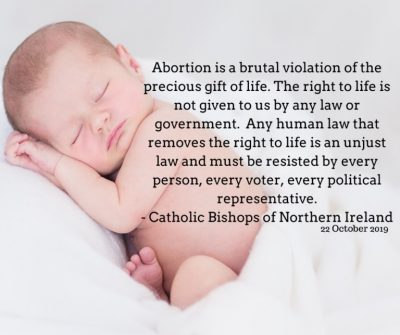 The Moderator of the Presbyterian Church in Ireland has said the legal framework for access to abortion in Northern Ireland published by the British government on Wednesday not only “goes too far” but is “a deeply sad and worrying moment”.

Rt Rev Dr William Henry called on locally elected representatives in Northern Ireland to consider how, in due course, the legislation might now be amended by the Assembly at Stormont.

In a statement Dr Henry said, “Today is a deeply sad and worrying moment, as I am sure many will be struck by the contradiction, that at a time we are all taking such drastic measures to preserve life, legislation is introduced to take it.”

“It is also a moment of great sadness and profound regret, as this legislation does not reflect the position of many in the community – people of all faiths and none. The Government said that it wanted to deliver the new abortion framework in a way that works best for Northern Ireland. In fact, the Government’s own figures show that out of approximately 21,000 responses nearly 8 out of 10 were against these proposals.”

Dr Henry highlighted that for the first time in Northern Ireland, children with Down’s syndrome and other conditions will be unprotected and “incredibly vulnerable” and he added, “not to mention those children, who in the eyes of some parents, are the wrong gender”.

The abortion regime announced by the Conservative Government on Wednesday will include disability selective abortion for any disability including Down’s syndrome, cleft lip and club foot, right up to birth.

There is no requirement that a doctor must be involved, midwives and nurses will be able to provide abortions and there is no provision for independent counselling for women seeking an abortion.

In a statement, Right To Life UK highlighted the findings of a new poll by the University of Liverpool and Britain’s Economic and Social Research Council which shows that 58% of Sinn Féin voters and 54% of DUP voters want Northern Ireland’s new abortion framework to only allow abortions when the mother’s life is at risk.

Only 5% of all voters support introducing abortion through to 24 weeks, which is in line with what the Government will be introducing to Northern Ireland.

Spokesperson for Right to Life UK, Catherine Robinson said, “Despite the fact that Stormont has returned and the UK is in the middle of the Coronavirus crisis, the UK Government are proceeding with imposing an extreme abortion regime on Northern Ireland on 31st March 2020.”

“To add insult to injury, they have taken what Parliament asked them to impose on Northern Ireland and made it far worse, meaning Northern Ireland will have one of the most extreme abortion regimes in the world, despite 79% of respondents to the consultation being opposed to any abortion provision in Northern Ireland beyond that which is currently permitted.”

She highlighted that the new abortion regime will legalise sex-selective abortion and introduce abortion for babies with disabilities including cleft lip, club foot and Down’s syndrome to birth and will introduce de facto abortion-on-demand to Northern Ireland through to 24-weeks.

“It will also open up abortion provision to midwives and nurses. This goes much further than the law In England and Wales, where abortions can only be performed by a doctor and the Abortion Act requires the approval of two doctors before an abortion can be performed,” Catherine Robinson warned.

Abortions will also be available at GPs surgeries throughout Northern Ireland, this again goes further than the law In England and Wales, where abortions are restricted to hospitals or places approved by the Secretary of State.

Right To Life UK are calling on the public to visit www.rightolife.org.uk/repeal where they can email their local MLAs calling on them to bring forward legislation as soon as possible to Stormont to repeal this change to the law which has been imposed on Northern Ireland.

Abortion was decriminalised in Northern Ireland in October as a result of legislation passed in parliament in Westminster.

The North’s First Minister, Arlene Foster, who opposed the liberalisation of abortion, said it was a “very sad day for Northern Ireland”.