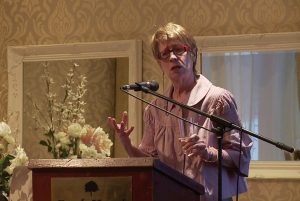 Leading Irish psychiatrist Professor Patricia Casey has announced she will not appear before the Oireachtas Committee examining Ireland’s abortion law in protest over its “deeply flawed process” and likely “equally flawed conclusion”.

Early on Thursday morning, the Mater Hospital psychiatrist issued a statement in which she said she was “unwilling to participate in a process that is so deeply imbalanced in respect of those invited to present evidence.”

She was scheduled to present before the Oireachtas committee on 25 October but that presentation won’t now take place.

“I have carefully followed the sessions of the 8th Committee in preparation for, and in anticipation of, appearing before it. It has become increasingly clear that the process of the Committee has been so arranged as to reach a pre-set decision without balanced consideration of any evidence that runs contrary to this pre-determined outcome,” Patricia Casey said.

She added, “There are 25 on the pro-choice side and 4 with a pro-life or neutral perspective. Ireland deserves better than that.”

Professor Casey’s announcement came as the Oireachtas committee agreed that Article 40.3.3 of the Constitution should not be retained in full. The decision ensures the committee will recommend a referendum on the Eighth Amendment, which the Government has indicated will take place next May or June.

Last week, Independent TD Mattie McGrath and Independent Senator Rónán Mullen accused the Oireachtas Committee on the 8th Amendment of being “a propaganda exercise in favour of abortion”.

The two Oireachtas members said some witnesses due before the Oireachtas Committee were actively fundraising to change Ireland’s abortion laws and this showed “how skewed in favour of abortion the Committee’s work has become”.

They hit out at the fact that the Committee was now hearing from ‘advocacy groups’ as expert witnesses.

The two politicians highlighted how among these ‘expert witnesses’ whose presence at the Committee the taxpayer is funding, is the New York-based abortion-campaigning group, Center for Reproductive Rights, which has been fundraising online in the US in recent weeks to overturn Ireland’s pro-life laws.

In her statement, Professor Casey said she believed the Oireachtas Committee was failing Ireland’s unique European position in providing protection for the rights of an unborn child and was failing in its duty to Ireland to fairly consider evidence that runs contrary to its fixed and inevitable conclusion that the Constitutional protections for the unborn child should be abandoned.

“I will not add any further credence to this deeply flawed process or to its inevitable and equally flawed conclusion that a referendum is required to repeal the 8th Amendment without any meaningful constitutional protection for the unborn child,” she underlined.

Professor Casey said she also had “concerns about the tenor and veracity of some of the remarks made by some Committee members at committee hearings.

“I was forcibly struck by the comment of one member that ‘lies’ were being told about botched abortions and gestational periods. An example of a botched abortion was offered by one of the speakers who claimed that a woman had died travelling between Britain and Ireland for an abortion, although the example was used to justify performing abortions in Ireland.”

“The incident was subsequently erroneously reported as taking place on the flight back to Ireland. In fact, this woman tragically died in a taxi after an abortion in London and this information has been in the public domain for a long time.”

“The member of the committee who spoke of ‘lies’ had clearly never heard of this case while the person who made the comment used it to castigate our laws when this tragedy was due to the procedure itself obtained in the UK, something that could as easily have happened here, if we had abortion clinics.”

Emphasising that she has never demurred from informing the public of the evidenced based information in respect of women’s mental health and abortion, and that she did so in 2013 before a similar Oireachtas Committee when the Protection of Life in Pregnancy Bill was being considered, Professor Casey said that had she felt that the current committee was “truly open and objective I would have presented the research evidence showing that abortion does not protect women’s mental health, information on the debate on whether abortion harms women’s mental health and the data limitations concerning refused abortion”.

She concluded, “In my opinion this committee has adopted as its primary purpose a determination to repeal the 8th Amendment and to that end is intent on advocates of that position being favoured over independent experts. It was, I suggest, supposed to conduct a balanced hearing and, in that purpose, has failed. The great tragedy is that this failure is designed to reduce the Constitutional protection of Irish unborn children. The public are being manipulated and in conscience, I cannot be used by it to legitimatise its pre-determined outcome.”

The Eighth amendment to the Constitution guarantees to protect as far as practicable the equal right to life of the unborn and the mother.

Meanwhile, the Masters of the two biggest maternity hospitals in the country have both declared their support for abortion where a child suffers either from a fatal or a non-fatal foetal abnormality.

If implemented, this would mean that unborn children suffering from conditions such as Down Syndrome could be aborted in Irish hospitals.

In the UK, 90 percent of babies diagnosed with Down Syndrome are aborted.

Professor Fergal Malone of the Rotunda Hospital Dublin, and Dr Rhona Mahony of the National Maternity Hospital appeared before the Oireachtas Committee on Wednesday evening.