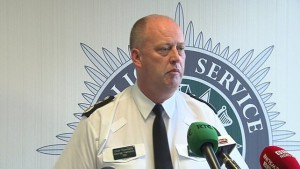 The Chief Constable of the Police Service of Northern Ireland (PSNI), George Hamilton, has said he would like to see Catholic police officers making up half of the force.

He was speaking at the 100th passing out parade of new officers at Garnerville in Belfast last weekend.

“We want the police service to be as representative as it possibly can be,” George Hamilton said and added that he wanted to go over and above the Patten recommendations.

“The Patten Commission, established in 1998 as part of the Belfast Agreement, suggested at least 30% of police officers should be Catholic. Now about 32% of the PSNI is Catholic.”

“Fifteen years on, this organisation has been built and transformed from what it was and I am very proud of that,” he said.

As he attended the graduation ceremony at the PSNI college in Garnerville, east Belfast, Mr Hamilton insisted would-be recruits were not being put off by threats posed by violent extremists.

He also expressed confidence that recruitment was not being impacted by fringe elements committing “mad and unacceptable” acts.

He added, “Every time we advertise we get close to 5,000 people applying for what’s generally between 200 and 400 jobs, so the labour market is such that people across Northern Ireland are willing to put themselves forward to serve their communities and I take heart from that,” he said.

Speaking about the officers of the PSNI he said, “I take great heart from the courage the bravery and dedication of PSNI officers who every day put on a uniform and go out to keep people safe – that’s what we are about and that’s what we get a buzz out of and I am really proud that we are able to do that.”

Anne Connolly, chair of the PSNI’s oversight body, the NI Policing Board, said there was no difficulty attracting people to the PSNI.

“We get numerous applications, we can’t cope with all of the people that want to come in – that’s a really good sign,” she said.

The officers will now complete a probationary period for two years during which time they will be mentored for one year.

Since the inception of the PSNI there have been a total of 4,576 officers who have graduated. The first squad of PSNI officers graduated at Garnerville on 5April 2002.