Protests over name change for Our Lady of Lourdes Hospital 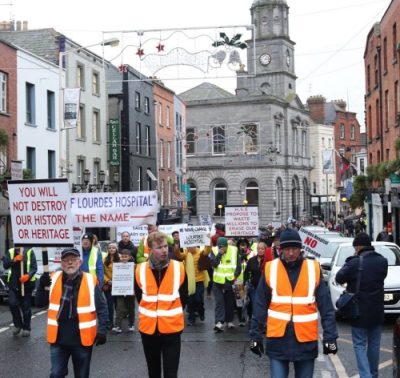 Hundreds protest on 6 January against proposal to change name of Our Lady of Lourdes Hospital in Drogheda.

A delegation of people from the ‘Save the Name’ committee demanding that the name of the well-known Our Lady of Lourdes Hospital in Drogheda remain the same is to meet the General Manager of the hospital on Monday.

Up to a thousand people gathered in Drogheda last Sunday to protest against a proposed name change for the iconic hospital, which was founded by Mother Mary Martin, founder of the Medical Missionaries of Mary.

“People might say, ‘What’s in a name?’ Living in Drogheda, the hospital has a lot of resonance with the people of the town, Anthony Moore BL told Catholicireland.net.

“It was built in 1957 by Mother Martin with the help of the people of Drogheda, so it is not a hospital that was put up by the government of the day. This was a hospital that was built when the Department of Health had no interest in building a hospital in Drogheda. Mary Martin went around. Land was donated. The people of the town contributed. There was a buy a brick campaign and various other fundraisers organised and in the 1950s that money was put together and the hospital was put up. We all have a lot of attachment to the hospital.”

Mr Moore, Fianna Fáil public relations officer in South Louth and East Meath, was one of those who addressed the public rally on Sunday in Drogheda. According to him, through its connection with the Medical Missionaries of Mary, the hospital connected Drogheda to the wider world. “If the name is lost we are going to lose that history, that heritage as well.”

After the march and rally on Sunday, a small delegation from the Save the Name Committee, led by its chairman, Robert McGuffan, handed in a letter accompanied by a petition signed by over 8000 people to the General Manager of the hospital.

Yesterday Mr McGuffan received a letter from the General Manager, Fiona Brady, inviting them to a meeting next Monday.

In 1997 the HSE bought the Our Lady of Lourdes Hospital , one of the busiest acute hospitals in the country, from the Medical Missionaries of Mary.