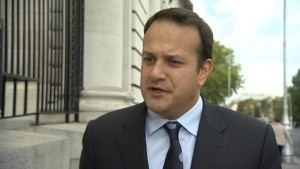 The government announced on Monday night, after a four-hour Cabinet meeting, that it will hold a referendum on the Eighth Amendment in May.

The referendum will ask people whether they want to retain the Constitution’s Eighth Amendment, or ‘repeal and enable’, which would see Article 40.3.3. removed from the constitution and replaced with a new enabling provision that gives responsibility for legislating on abortion laws to the Oireachtas.

If the referendum is defeated, there will be no change to the current situation.

At a press conference late on Monday night, the Taoiseach Leo Varadkar revealed that in addition to calling for a repeal of the Eighth Amendment, the ‘enabling’ provision would insert the following clause into the constitution that “provision may be made by law for the termination of pregnancies”.

He also indicated that the referendum is likely to be held towards the end of May and not in June.

Minister for Health Simon Harris, who is tasked with working out the wording of the referendum, said it would be revealed at the beginning of March.

The Cabinet also gave Minister Harris permission to draft a bill that will be introduced into the Oireachtas if the referendum is passed.

The proposed bill will be in line with recommendations made by the cross party Oireachtas committee in December which called for the Eighth Amendment to be repealed and for access to abortion without restriction up to 12 weeks.

At the press conference on Monday evening, the Taoiseach said that if the referendum is approved by the Irish people, “a doctor-led, safe and legal system for the termination of pregnancies will be introduced”.

He stressed that there would be restrictions. “The pill which brings on miscarriage in early pregnancy will not be available on demand, over the counter of a pharmacy or anywhere else. It will only be prescribed by a doctor who is on the specialist register.”

He said that after 12 weeks gestation, abortion would only be allowed in exceptional circumstances such as a serious risk to the life or health of the woman or in the event of fatal foetal abnormality.

Expressing his certainty that the referendum would be approved, he said it would show that the country had come of age, as it was “no longer willing to export our problems and import our solutions”.

But he also acknowledged that by allowing Article 40.3.3 to be removed from the constitution, future Oireachtais could make new laws on abortion.

There is concern that this will lead to even greater liberalisation of the country’s abortion laws down the line.

Responding to the news, the Pro Life Campaign said the government’s announcement was “as bad as anyone could have envisaged: ‘the removal of legal protection from unborn babies and providing for abortion on demand’.”

Pro Life Campaign spokesperson Dr Ruth Cullen said, “It is a very sad and serious moment for our country. Tonight, the government brought forward a proposal that for the first time in our history would withdraw basic human rights from a group of vulnerable defenceless individuals instead of strengthening their constitutional protections.”

She continued, “They can’t disguise the fact that what’s being proposed is solely about stripping unborn babies of all meaningful legal protections.

“The right to life is an inalienable right. It’s not something that can be conferred or withheld by the State at its pleasure. The Eighth Amendment acknowledges this basic right to life; it doesn’t claim to be its initiator – merely its protector.”

According to Dr Cullen, in the coming weeks, it will become clear that the government’s proposal would lead to abortion on demand if voted for in the referendum.

“As people come to realise this, I have every confidence they will vote to retain the Eighth Amendment with a renewed commitment to building a more welcoming society for expectant mothers and their unborn babies,” she said.