Primate warns some want to rob Church of hope 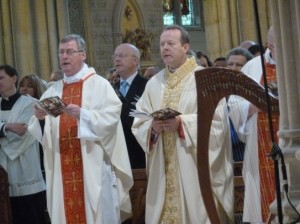 The leader of the Catholic Church in Ireland has warned that there is “a definite temptation” nowadays to “rob the Church of hope”.

Archbishop Eamon Martin made the comment in his homily on Friday in San Colombano Al Lambro in northern Italy at a concelebrated Mass to mark the 1400th anniversary of the death of St Columbanus.

Elsewhere in his homily, the Primate of All Ireland said, “We often hear people speaking about the decline in Church practice, or the lack of vocations to the priesthood and religious life as signals that Europe has ‘lost the faith’.”

He acknowledged that it is true that many people in Europe have drifted away from regular Church practice.

That there is an increasing loss of the ‘sense of the sacred’, and more and more people seem to be growing used to living their lives with little or no reference to belief and trust in God.

However, he reminded the faithful that Pope Francis tells us that it is now, more than ever, that the world needs to hear the song of the Lord, ‘the joy of the Gospel’.

“He challenges us to get out there and to bring faith to life. A Church which does not come out of herself to evangelise, he said, becomes self-referential and then gets sick,” Dr Martin said.

“When I was ordained as a bishop last year I chose for my episcopal motto the verse from the psalms: Cantate Domino Canticum Novum [Sing a new song to the Lord].  I love the optimism and joy of those words.”

He said the greatest challenge and opportunity facing our Church these days – our parishes, our homes and our Catholic schools – is how do we become ‘missionary’ and get out there like Saint Columbanus did, singing the new song of the Lord to the world?

Citing Pope Francis’ apostolic exhortation Evangelii Gaudium, he recalled the Pope’s call for pastoral ministry in a missionary key which “seeks to abandon the complacent attitude that says: ‘We have always done it this way’. It invites everyone to be bold and creative in this task of rethinking the goals, structures, style and methods of evangelisation in their respective communities’ (EG 33).”

The Archbishop of Armagh said he imagined that St Columbanus would be very happy with these words of Pope Francis.

To honour the memory of St Columbanus, Archbishop Martin invited the faithful to reflect on three questions for their own life, their parish community and for the Church throughout the world:

–          How can I be more missionary, like Columbanus, in my personal life, in my family and in my community?

–          Who are the people around me who are thirsting to hear and experience the joy of the Gospel?

On Sunday, the Vatican’s Secretary of State, Cardinal Pietro Parolin will join Bishop Noel Treanor of Down & Connor in a concelebrated Mass in Bobbio where St Columbanus died in 615AD.