Home > News > Bring hope to those tempted to despair: Primate

Bring hope to those tempted to despair: Primate 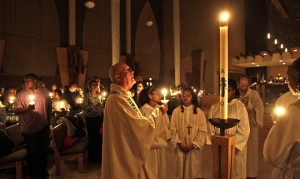 During the Easter season we should consider how we can bring the joy and comfort of the Risen Christ into the lives of those who have heavy crosses to carry, the Primate of All Ireland has suggested.

In his homily for the Easter Vigil Mass in St Patrick’s Cathedral Armagh, Archbishop Eamon Martin urged the faithful to pray and work for the gift of hope, especially for those in Ireland who are finding it difficult to cope with the worries of everyday life such as financial problems, relationship difficulties, sickness or bereavement and those who may be tempted to despair about the future.

“The Easter Vigil is a truly joyful celebration and ‘Alleluia’ is our song. Our Alleluias are made all the more joyful by the realisation that God became a human being and suffered for us on Good Friday.”

But the Archbishop acknowledged that sadly, the Cross of Good Friday continues to cast a long shadow in the world from the hungry lands of Ethiopia where Mahlet, the young girl on this year’s Lenten Trócaire box, lives; to the refugee camps of Syria; to the homes of Kenya where families are left devastated this weekend by the murder of their loved ones at Garissa University on Holy Thursday.

“If the story of salvation had ended on Good Friday, we would be a people of despair, only able to cry out as Jesus did on the Cross: ‘My God, my God, why have you abandoned us?’”, he acknowledged.

“I know that for many people across the world and here in Ireland that feeling of abandonment and emptiness is very real. It is comforting for them and for all of us to know that Jesus also felt rejected, abandoned, almost swallowed up by evil before the victory of Easter destroyed death and restored life,” the Primate said.

In his homily for the Chrism Mass on Holy Thursday, Archbishop Martin  that being like Christ in an increasingly secularised world often means being different, counter-cultural, and not easily swayed by the prevailing attitudes and opinions around us.

“This is not easy. The pressure on us to conform, to become just like everyone else is often immense and overpowering. Sometimes daring to witness openly to our sincerely held Christian convictions can bring upon us ridicule, condemnation or even persecution.”

He said he was thinking, for example, about Catholics’ “strong beliefs in the sacredness of human life from the first moment of conception until the moment of natural death; our Church’s understanding of marriage and the family; our Catholic social teaching about the fair distribution of goods, care for creation and concern for the weakest and most vulnerable”.

Archbishop Martin said it was “equally challenging for us in our ministry as priests and bishops. At ordination we promised to become more and more closely conformed to the Lord Jesus, and to discharge faithfully the sacred office of teaching.”

“But we know how difficult it can be sometimes to speak clearly and courageously about the truths of the Gospel and the riches of the faith handed down to us. The world in which we minister is inclined to shun moral absolutes, or any talk of God’s law and the natural order of things.