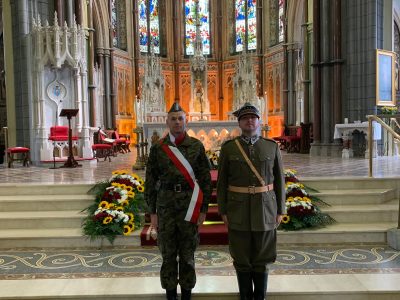 The head of the Catholic Church in Ireland has recalled the “huge sacrifices” made by the people of Poland as he marked the invasion of their country exactly 80 years ago.

On 1 September 1939, Hitler’s German forces invaded Poland, an act of aggression which marked the outbreak of World War II.

In his homily at a bilingual Mass in the Cathedral of St Patrick & St Colman in Newry, Co Down, Archbishop Eamon Martin told the assembled members of the Polish community, “You, the Polish people, have known first-hand the horror and demeaning impact of the Second World War.”

He said many of their grandparents and great-grandparents would have endured the forced partition of their country and the massive displacement of their people. They would have grieved over the deaths of one in five of Poland’s citizens during the war.

An estimated 55 million civilians lost their lives during Second World War II, and perhaps 25 million others perished, who were members of various military forces.

“The war,” Archbishop Martin said, “represented the worst in ‘man’s inhumanity to man’. In addition to the lives and livelihoods lost, whole villages, towns and cities across the world were destroyed; centuries of historic and cultural treasures were wiped out.

“But above all, humanity still hangs its head in shame at the nuclear massacre of civilians in Hiroshima and Nagasaki, and the horrendous brutality of the Holocaust with its systematic attempt to wipe out the Jewish people and other groups deemed expendable.”

He recalled the inscription on a granite block at the Nazi’s Auschwitz-Birkenau death camp which the German regime ran in occupied Poland during the war which states: “Let this place forever be a cry of despair and a warning to humanity.”

It was here, he noted, that Pope Saint John Paul II knelt and described the camp as the “Golgotha of the modern world”.

But returning to modern times, Archbishop Martin said it was “frightening” that despite the memories and painful lessons of World War II “and the outrageous scandal of the Holocaust”, the tragedy of violence and conflict continues in many parts of the world today.

He added that humanity has still to learn true humility. “Human pride and arrogance continues to feed a creeping culture of death, violence, aggression and war.”

The Archbishop said Sunday’s anniversary “commits us to redoubling our efforts to counter the language of hate, barriers, walls and separation with peace-making, reconciliation, bridge-building and cooperation”.

On anniversaries like this, he said, the advice of Pope Francis is important: to beware jealousy, envy, conflicts, and gossip which can destroy unity.

“Instead, the Holy Father encourages us always to nurture unity and peace through humility, gentleness, and a heart wide-open for forgiveness.”

He thanked the Polish community for their valued contribution to Ireland – north and south – in recent decades, and paid tribute to the Polish priests who have come to minister in Ireland and provide pastoral care to Polish communities here.