Home > News > Primate open to idea of a national synod

Primate open to idea of a national synod 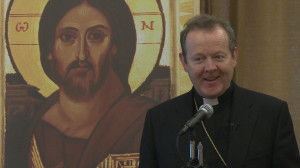 The Primate of All Ireland has said he would be open to the possibility of a national synod for the Irish Church at some point in the future.

Speaking to the international Catholic weekly, The Tablet, Archbishop Eamon Martin said for now, “We are listening on the ground, putting in place the new infrastructure for the Church in Ireland,” in a reference to a number of listening processes taking places in Irish dioceses.

“The Church in Ireland is in a period of change and transition,” he commented and referred to the appointment of up to eight new bishops over the last two years and more to come in 2015.

This, he pointed out, will mean that within the next few years almost half the episcopal conference will have changed and almost half of the dioceses of Ireland will have new bishops.

Of a national synod, he responded, “I would be very open to the possibility that at some point in the future, that it might lead towards a national discussion.”

However, he added that for now “it is time for discussion on the ground which is locally based as Bishop Leahy is doing and as we are doing here in Armagh and have been doing over the last year or two, where we are listening on the ground.”

“I think sometimes people look to big national centralised initiatives as if there is going to be a master plan for the church in Ireland. I smile often when I think of Pope Francis’ lines in Evangelii Gaudium where he says ‘I don’t want you sitting around board room tables like defeated generals dreaming up some massive strategy for change’.”

The Archbishop said he would be guided by his fellow bishops but his personal feeling was that “we might be some way off from a big national event; but that doesn’t mean that we shouldn’t be engaging on the ground, as many of these new bishops are already doing all over the country.”

The Church in Ireland, Archbishop Martin told CatholicIreland.net, is on a “journey inwards and a journey outwards” which “may in time lead to a national synod”.

Of the change and transition within the Irish Church, the Primate of All Ireland said, “We don’t have to look back very far before we see a time when there was extraordinarily high practice rates – very large numbers of vocations to the priesthood and religious life. It is clear if you compare that to today you see a radical difference, really now we have smaller numbers of people going to Mass every week.”

However, he added that there is “a large number of people who still feel attached to their Church but they may not be practising very regularly” and there is a whole group of people who maybe come to Church at times like Christmas and Easter – “for them it is almost like coming home in some ways and coming back to the family of the Church,” he said.

“So I think the context in which the Church is living and operating at the moment is a very different one to that which has been in the past.”

“For me personally I also think it is a time of great hope,” he said and said its journey is two-fold.

“I would describe the journey inwards and a journey outwards. A journey inwards in the sense that people of faith and people with some faith are finding themselves questioning a little bit more – trying to build a personal relationship with Jesus. This whole idea that fundamentally faith is about a personal encounter with Christ, was very much Pope Benedict’s idea and it has been picked up now by Pope Francis.”

“But Pope Francis is calling us to a journey outwards; he doesn’t want us to be entirely focused inwardly on ourselves and feeling sorry for ourselves – ‘oh isn’t it a great pity that we don’t have the great practice rates that we had in the past’.”

“I see green shoots of new life all around the Church in Ireland which are growing quietly and need to be nurtured and cared for amongst committed young people for example, amongst young families who are now having to make a very definite choice to bring up their children in the faith.”

Dr Martin said that for him “change is what gives us life – renewal” and so “anything that makes us question and make a personal commitment is going to be good for the faith and good for the Church”.