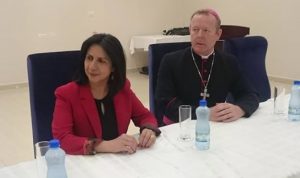 The Primate of All Ireland has referred to the peace process which brought an end to the conflict in Northern Ireland as he urged the people of Bethlehem and Christians in the Middle East not to lose hope.

In his address to the Mayor of Bethlehem, Ms Vera Baboun, Archbishop Eamon Martin explained that, “Through our experiences in Ireland, we know the frustration caused by a seemingly endless cycle of conflict and the ever-present temptation to despair. We want to bring you hope.”

He said the people of Northern Ireland understand the struggles that are felt and experienced by local communities in the Middle East who are weary of conflict, violence and injustice.

“We too have had armed soldiers on our streets, heavily fortified checkpoints and security walls which interfere with the normality that ought to be daily family and commercial life.”

“We too have lived with the daily threat of bombs and shootings, and have seen how sectarianism, hatred and bigotry can turn neighbours into enemies, neighbourliness into suspicion, culture and even religion into difference and division.”

The Archbishop said that through “the great blessing of God that is the peace process in Ireland, we also know that resolution and reconciliation are possible and that violence and conflict can be overcome and replaced by peace and security”.

Dr Martin underlined that the transforming power of courageous leadership, supported by international cooperation and solidarity, and nourished by the collective goodwill of ordinary people who say ‘enough is enough’ and who dare to extend the hand of friendship in prophetic ways across the divide, should never be underestimated.

He said the 178 pilgrims from Ireland were not there to offer simplistic solutions to a complex conflict or pious platitudes.

“We come with the only things we have: prayer and solidarity. In this birthplace of the ‘Prince of Peace’ we intensify our plea for mutual understanding and a just and lasting peace for this land which has known too much conflict, too much pain and division,” he said.

He stressed to the Mayor that the central aim of the pilgrimage was to express solidarity with the Christians of this land “who are the descendants of those who first heard the joy of the Gospel in the song of the Angels, that message of glory to God and peace to people of goodwill which has resounded down through human history for some 2,000 years”.

He added that as they walked over the days of the pilgrimage among the excavations of ancient foundations from Nazareth to Jericho and Jerusalem, they were conscious that the Christians in this land are the ‘living stones’ who have faithfully borne witness to Christ in handing on the Gospel for more than twenty centuries.