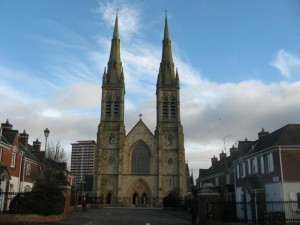 A Belfast priest is recovering from the ordeal of being held hostage and threatened at gunpoint by raiders who ransacked the parochial house in which he was staying.

Fr Peter Carlin had only recently come to St Peter’s in Belfast, having worked with the Columban’s South America Priest Association programme in Peru for a number of years.

The priest’s nightmare began last Monday night (13 July) at 9.30pm when armed robbers gained entry into the presbytery of St Peter’s Cathedral, Belfast, and threatened Fr Carlin holding him hostage while they robbed the property.

Before leaving, they locked the priest in a room where he was to spend the night.

At 10am the next morning morning he managed to escape and called the PSNI.

“The level of organisation and aggression perpetrated by these robbers is particularly disturbing and deeply concerning.”

He said Fr Carlin was recovering and had received many messages of support from parishioners, clergy and the local community. He is now assisting the PSNI with their investigations.

The attack came just days after two priests in Omagh were held at gunpoint and robbed.

On Saturday morning (11 July 2015), the parish priest of Drumragh, Mgr Joseph Donnelly left his house to go to the Sacred Heart Church for 10am mass.

“On my way over I saw Fr Piotr (Zimnoch) coming towards me with two men. It was only when I was level with him I realised that something was wrong. They said, ‘we’re going to your house and we have a gun’,” he told the Tyrone Constitution. 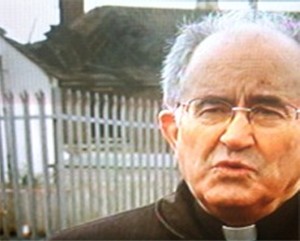 “Once inside, the two men indicated the room they wanted to go to – the room that had a safe. There were some loose notes and they started to look for more. We were both taken into the livingroom and the two of them told us they were going upstairs to look for more money. They told us not to move or they would shoot us.”

“However, a few minutes later when they didn’t return to the sitting room we guessed they had exited the house and were gone, and I managed to put in an emergency call to the police. It was all over in about 20 minutes.”

Mgr Donnelly said that although they were physically unhurt they felt a real threat of violence.

“Once it became clear they had a gun, the threat of danger was a very real warning. They told us they were going to shoot us. We believed they would have no qualms about doing that. It was a real attack, they knew exactly what they were coming for. They were intent on getting the safe. The money was taken out of the safe and once they had the money they had no interest in being there.”

Mgr Donnelly went on to officiate at a wedding just hours later.

“I was so glad that word about the robbery hadn’t got out before that and the wedding passed off fine, thankfully,” he said.

Like Fr Carlin, the priest paid tribute to the huge support he had received from clergy, neighbours and local politicians, which he described as “incredible”.

“We are humbled by the level of support we have received. Our own congregation has taken it as a personal attack and we know the incident has been condemned by politicians across the board.”

This is the third time the parochial house has been the target of robberies, said Monsig Donnelly.

The police in Northern Ireland has appealed to contact them if they have any information relating to either of the attacks.