Unhelpful, unwarranted and unacceptable was how the Association of Catholic Priests (ACP) described the suggestion of the Minister for Education, Ruairí Quinn that time allocated to religious instruction should be devoted to core curriculum subjects instead.

“It seems at best a hapless effort to devise educational policy “on the hoof’ and, at worst, an indication of an intention to undermine religious education in the vast majority of our schools,” the ACP said in a statement

Minister for Education Ruairí Quinn had told the annual conference of the Irish Primary Principals’ Network Primary that teachers hard pressed to find enough hours in the day to address the school curriculum should consider switching time from religious instruction to providing literacy and numeracy skills. According to the Irish Times when the Minister’s comment was met with surprise he said it was merely a suggestion.

The Association cautioned that populist opinions, expressed as ‘suggestions’, do little to further educational change, even when everyone agrees that it is necessary.

“Opinions which will be interpreted as threats fail to reassure those in discussion with the Minister, or the large numbers of Catholic parents who have a right to the religious education of their children,” said the ACP statement. 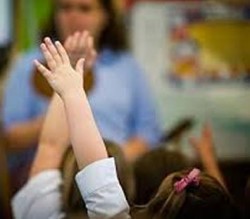 The ACP suggested that the Minister’s comment will be widely interpreted as an effort to undermine religion and religious-run schools and may damage the negotiations, at present at an advanced stage, to provide a wider choice for parents.

In his address the Minister had expressed his disappointment at the slow progress in divesting some schools of their Catholic patronage where it was already agreed.

The ACP further stated that the Minister may be unhappy with the pace of change, and with the power of parents to influence decisions.
“His unreflective comments could have the effect of placing a huge question-mark over the Minister’s intentions. Is the debate on patronage and the process that attends it really meant to facilitate the hand-over of a minority of schools to facilitate a more diverse form of patronage, or is it part of a more ambitious attempt to remove religion from the public square?” asked the ACP.

The priests also noted that they would be “generally supportive” of the shift from school to parish for sacramental preparation and explicit faith formation but believe that religious education should remain part of the educational curriculum.