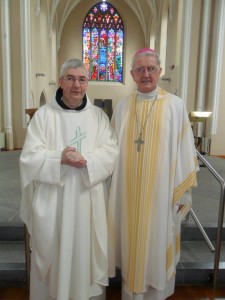 Fr Donal Davis was ordained to the priesthood last Friday (27 June) at the Cistercian Mount Melleray Abbey in Co Waterford.

This is the first ordination at Mount Melleray since 2006. The previous ordination was 20 years before that.

Fr Davis has been a monk with the Cistercians for 36 years, having entered the monastery in 1978 – the year of three Popes: Pope Paul VI, John Paul I and John Paul II.

“We are a monastery with monks, so the emphasis is on work and prayer. Priesthood was not in the picture when I entered,” he told CatholicIreland.net.

He worked as a cook, on the Abbey farm with the cattle, and as bursar (a post he continues to hold) during his time as a monk.

He says that the monastic life at Melleray has changed.

Now the monks are more in administration, working with lay employees and engaged in arrangements such as the farm partnership with lay people who run the dairy heard and land.

When the need arose for a priest due to the ageing community at Mount Melleray, Brother Davis, who was in his 50s, was younger than many others in the community, so he agreed to go forward for the priesthood and undertook studies at Angelicum in Rome.

In the company of family, community and friends he was ordained by the local retired Bishop of Waterford and Lismore, William Lee, on Friday.

There were great celebrations but also sadness on the ordination day as the monks had buried another member of their community, Fr Francis Carton, who died earlier in the week. 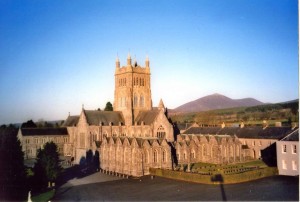 There are 19 men in community at the Abbey which is situated in the Knockmealdown Mountains in Waterford. There were 150 in the 1950s and some of them are still at the Abbey and now in their eighties and nineties.

There has been some interest in vocations in recent times. For example, a Nigerian and a Croatian stayed with the community for a time.

The monks feel that a young man entering into community alone with much older men might find it daunting.

Next year they plan to take in interested younger people in a small group so they can be company for one another and support each other.

People from Malta, South Africa and Korea have expressed interest in the monastic life with the Cistercian community.

Fr Davis stated that there is a “slight improvement” in the level of interest in vocations to the religious life but he added: “We are in the hands of God. It is a crucial time for vocations and our future.”

The Abbey has a guest house and visitor centre/museum and its website was given a new look last year, and all are popular with visitors.

The church is particularly well attended around Easter and at other important church occasions and feast days.