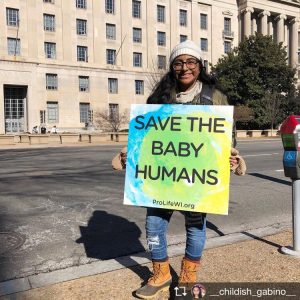 American president, Donald J Trump, became the first President of the United States to address a pro-life rally while in office,  when he sent a message by video link from the Whitehouse Rose Garden to tens of thousands of demonstrators gathered on Washington’s National Mall this past weekend.

The annual March for Life is the biggest pro-life rally in the world, and this year numbers were boosted significantly by young Americans who have chosen to label themselves ‘The Pro-Life Generation’.

Abortion and the right-to-life of the unborn is a major fault line in American politics. Arguably, the Democrat Party has lost its traditional support among Catholics because it promotes easier access to pregnancy termination services. Indeed, one of the reasons Hillary Clinton lost the presidential election to Donald Trump in 2016 was that she was seen as ‘pro-choice and he was seen as ‘pro-life’.

The ability of state legislatures to outlaw abortion in America is curtailed by a 1973 Supreme Court ruling, known as Roe vs Wade, where the court ruled that a woman’s right to privacy must be balanced against the state’s interest in regulating abortion provision.  The woman at the centre of the Roe vs Wade court case, Norma McCorvey, changed her position and became an anti-abortion activist in her later life. She died aged 69, last year.

President Trump appears also to have had a change of heart, as previously he spoke in favour of women having access to abortion. On Friday, the President told the marchers, “As you all know Roe versus Wade has resulted in some of the most permissive abortion laws anywhere in the world. For example, in the United States, it’s one of only seven countries to allow elective late-term abortions along with China North Korea and others. Right now, in a number of States, the laws allow a baby to be aborted from his or her mother’s womb in the ninth month.  It is wrong. It has to change. Americans are more and more pro-life. You see that all the time. In fact, only 12% of Americans support abortion on demand at any time.”

The President was fully aware of the political gesture he was making in addressing the crowd, saying, “I’m honoured and really proud to be the first president to stand with you here at the White House to address the 45th March for Life, that’s very, very special. Today tens of thousands of families, students, and patriots, and really just great citizens gather here in our nation’s capitol. “You come from many backgrounds, and many places, but you all come for one beautiful cause, to build a society where life is celebrated and protected and cherished.