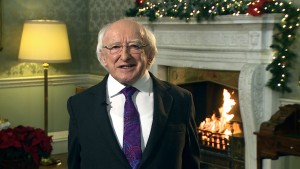 In his Christmas and New Year message, President of Ireland, Michael D. Higgins said this is a time for family, reflection and thanksgiving but above all a time to share with the homeless and refugees in our midst.

“As we reflect on the story of Christmas and the birth of Jesus, on the plight of the homeless Joseph and Mary anticipating the birth of their child, and how they were aided by complete strangers, we can perhaps draw inspiration from what they experienced for our own lives and times,” he stated.

He added that the Christmas story gives us guidance on how to shape “our own shared humanity” looking to the future.

This year Ireland accepted new obligations along with other nation states in relation to global poverty and climate change, he noted.

“During 2015, we learnt that one in every 122 people on the planet is now a refugee, a “displaced person” or otherwise forced to leave their homes. Wars, conflict and persecution have forced more people to flee than at any other time since records began,” the President stated.

He added that as people of a migrant nation we can understand the agony experienced by the 60 million displaced people.

It is heartening to see how countless people in Ireland have responded with warmth and real hospitality, he said.

“Our NGOs, our medical services, and our uniformed services – both at home and overseas – are peopled by those who have chosen to take action, and to be the stranger that offers a helping hand, a shelter, a meal to those in need,” the President continued.

“How we treat the weakest among us is the finest test of us as a nation.”

During the past year, the President and his wife Sabina Higgins have seen firsthand the contribution to community and public life made by Irish people in many different ways.

“Together, we can strengthen that web of solidarity that binds us as a people and as a global community next year,” President Higgins suggested.

He added that commemorations of all that shaped the birth of the Republic are not just to recall those events, but also “to re-imagine” and be inspired by the Republican ideals of almost a century ago.

“It is my sincere hope that those ideals can inspire each and every one of us on our shared journey where each step made by each citizen, in every generation, matters; a journey that we all make together, never alone.”

The Immigrant Council of Ireland welcomed the Christmas message of the President and said it is not only timely but must be acted upon if Ireland is to offer real safety, protection and hope to men, women and children seeking shelter from war and terror.

“The past year will forever be remembered for the tragedy that unfolded on the high seas and at Europe’s frontiers. In the face of such horrors, people across the country have demanded action, showing the “migrant nation” as described by President Michael D. Higgins, has not forgotten its own history,” stated Bran Killoaran, Chief Executive of the Immigrant Council of Ireland (ICI).

He added that ICI has highlighted a number of areas where leadership is required firstly more efficient procedures to allow people to restart their lives.

Secondly, that the most vulnerable, including those trafficked for sex and labour exploitation, stateless persons and children travelling alone be identified and offered protection and support to recover.

He concluded that integrating people is also a vital, and a comprehensive programme and Minister for Integration is required.