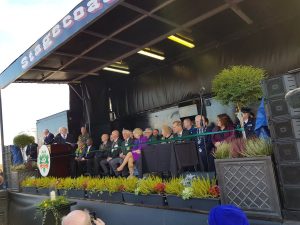 President Michael D Higgins has called for protection of the environment as climate change impacts on those communities least able to bear it.

Speaking as he opened the National Ploughing Championships, he said that the land sustains nearly 140,000 farm families across the Irish State, and over 170,000 people are employed in the agri-food sector.

Referring to Dr Noel Russell’s recently-published The Economics of Feeding the Hungry, the President said that the United Nations estimates that the planet will be home to nearly 10 billion people in 2050. This older and increasingly urbanised population will require a greater quantity and variety of food. Making this possible will have to be balanced with sustainability, environmental degradation and climate change.

“This will demand the expansion of the frontiers of science and technology, their utilisation in the service of sustainability, new skills, new methods, the cultivation and dissemination of technical expertise, and the preservation and protection of the habitats and ecologies upon which we all depend,” he said.

He said that the agricultural industry at home in Ireland will be challenged to meet the commitments Ireland has made in the Paris Climate Accord. The Irish government’s National Mitigation Plan includes commitment to reduce the carbon intensity of food production through more efficient breeding strategies, optimising nitrogen use, and exploring new feeding strategies. Programmes at farm level also encourage farmers to undertake environmental actions such as hedgerow and tree planting, reducing tillage, and low emission slurry spreading.

“We should not underestimate the effort that will be required, from all sectors of our economy, to reach carbon neutrality by 2050. As a nation, we made a pledge at Paris, not only to ourselves but to others, a pledge that will demand both leadership and moral courage. For the most dangerous consequences of climate change will fall on those least able to bear them, on those areas already vulnerable to desertification and rising sea levels,” said the President. 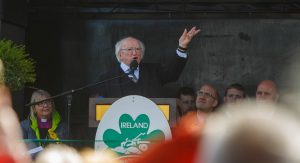 He said that Irish farmers had experienced many extreme weather events this year and have had reduced yields in crops and increased animal feed costs. He expressed his concern at the “vulnerability of the producer” in such a situation as well as with retailing edging closer to monopoly.

“The concentration of end profits, the vulnerability of producers in the face of these tendencies, can distort the relationship between producer and consumer that makes sustainability difficult,” he said.

To meet all these challenges the family farm model is central he said and added: “It must be nurtured and sustained – research indicates that this can be best achieved with appropriate regional policies and sufficient supports for farm families, whether it is in the field of environmental protection or in terms of market structure.”

In the wider European Union and the world, the challenge of climate change is looming. “It is together we must face these challenges and it requires an active State in every Member State of the European Union. Unregulated market forces cannot guarantee sustainable lives in farming, avoidable waste by consumers, or adequate nutritional advice and safeguards for all,” he said.

He concluded that there is an imperative for solidarity between all citizens, between rural and urban to meet all the challenges, such as addressing climate change and environmental degradation, managing Brexit, feeding the planet’s growing population, protecting farm families and rural communities, and: “above all, continuing to build a Republic of which our forebears would be proud, one rooted, like our people, in solidarity, compassion, courage, and generosity”.

President Higgins visited the National Ploughing Championships near Tullamore, Co. Offaly on the first day of the event on 18 September. The second day was cancelled due to adverse weather conditions.