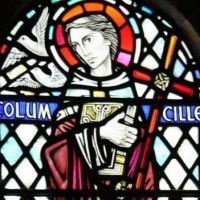 During the course of his visit to the renowned Christian site, the Scottish Culture and External Affairs Secretary, Fiona Hyslop, described his presence there as a fitting way of celebrating Scotland’s links with Ireland.

In her welcome address, Mr Hyslop said, “St Columba’s journey to Iona is just one of the many events which have created our strong bond with Ireland and it’s important that we recognise and celebrate the continuing significance of this remarkable man and the community he founded.”

She also paid tribute to “the substantial and enduring work of the Iona Community and the role it plays as part of Scotland’s diverse faith and belief communities.”

Saturday’s service marked not only St Columba’s arrival on Iona but also the Saint’s evangelising to the Picts, which resulted in Christianity becoming the dominant religion in Scotland.

During the service, President Higgins watched a performance by long psalm singers from the Isle of Lewis.

The President also delivered a keynote address entitled ‘Of Migrants and Migration’ at the Scottish island.

Later, he visited St Oran’s Graveyard where the grave of Macbeth, King of Scotland, who died in 1057 is located. It is also the burial place of John Smith, former leader of the Labour Party, who died in 1994.

In his keynote address, President Higgins suggested that Ireland and Britain have an opportunity, over the next decade of commemorations, to mark World War I, the Easter Rising and key events surrounding Irish independence – in a way that ignores those who want to fuel bitterness.

“Over the decade, we must remain conscious that the period we are remembering was one of intense conflict, in Ireland and so many other places,” he said in his speech.

“To fail to recognise this would do a disservice to our history. But a pluralist and above all, ethical, remembrance of a period of conflict or division does not, in itself, exacerbate such conflict,” he said.

“On the contrary, it can serve to cross boundaries, and bring us together in the present,” he said, adding that some will choose “to exploit the anniversaries, to perpetuate a narrow, exclusive interpretation of history and identity”.

The President’s visit to Iona followed in the steps of his predecessor, President Eamon de Valera, who travelled to the island 50 years ago to mark another anniversary associated with the Irish saint. St Columba is regarded as one of the most significant figures of the Dark Ages.

If Ireland and Britain choose to ignore those wanting an insular, bitter recounting of history then “we can use the experience of remembrance, if approached in an inclusive manner, with an openness to the experiences and views of others, and willingness to interrogate our own preconceptions, to transcend the historical divisions” and understand more about our neighbours and in doing so, ourselves, President Higgins suggested.

Mr Higgins was welcomed to the Scottish island by the spiritual leader of the Iona community, Rev Peter Mac Donald.

Established by St Columba in the 6th Century, Iona remained a significant religious community until the Reformation when it declined. It was revived again in the 1930s.

The ecumenical service at Iona Abbey was enriched by singing by the West Cork Choir of Cor Cuila Aodha under Peadar O Riada.

The visit to Iona was the final leg in President Higgins’ tour of the UK, which began in London on Wednesday with a speech to the capital’s Haringey Irish Cultural and Community Centre.