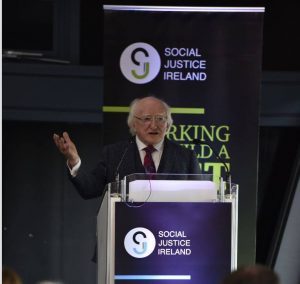 There is a deep and growing disjunction between the citizen and the state, and between the state and legally protected wealthy and powerful multinationals.

This is according to President Michael D Higgins who gave the kenynote address the Social Justice Ireland Annual Policy Conference which had the theme: Society Matters:  Reconnecting People and the State.

He said that there has been, “a period when the state has retreated, or been ideologically pushed to retreat, or redefine its role, the citizen’s social opportunity to fully participate or flourish, as many social philosophers would put it, has been diminished, and unaccountable sources of wealth and power have advanced.”

He thanked Dr Sean Healy, Social Justice Ireland (SJI) for including a quote from the late TK Whitaker in the preface of the programme which stated:

“We are not seeking economic progress for purely materialistic reasons but because it makes possible relief of hardship and want, the establishment of a better social order, the raising of human dignity, and, eventually, the participation of all who are born in Ireland in the benefits, moral and cultural, as well as material, of spending their lives and bringing up their families in Ireland.”

Referring to the Global Financial Crisis, the “responding to the market” justification, the celebration of “individual genius” and “vicious politics of the far-right” that are all too prevalent in recent times President Higgins spoke of “the changes in contemporary international economies, that are in our time presented as near inevitable, and that are being delivered as their sole policy choice to publics suffering the burden of what Pope Francis has called a ‘plague of indifference’.”

He added that this includes not just policy makers but those who are looking away from deepening inequalities, the welfare of workers, the plight of migrants. There were also those who felt they could not initiate change, and were forced to accept what was socially damaging as ‘inevitable’.

The President believes that we are entering a period of time in which, for the first time in many years, the future shape of the European Union will become a matter of “contestation and everyday debate.” He stated that in the coming debates, there will be an opportunity to draw to on the best moments of national and European histories, including those the most egalitarian and humane traditions, and on the sources of solidarity, humanism, innovation and capacity which can inform and transform the experience of the Europe or what he called the “European Street.”

He highlighted that globally there has been an affirmative decision by the state to “withdraw” in relation to market regulation. The most powerful and insufficiently transparent and accountable economic organisation is the multinational company and 80% of global trade takes place in value chains linked to these multinationals.

Nearer to home he said that in Ireland we have emerged on “auto pilot,” and we have not had a public discussion about “the appropriate mechanism to distribute credit in our country.”

He praised the excellent work of Ireland’s enterprise agencies in promoting domestic Irish enterprise and in ensuring that multinationals locate in Ireland. However, he posed the question of whether a similar agency could be resourced and show the same urgency in the task of housing our own people.

In conclusion he said that the challenges of the future can only be met by “a narrative of hope, a recognition that we can and will, change our own destinies and our own societies.” He added that hope must extend to all the peoples of globe and across the generations, recognising that all on the planet owe to each other a moral duty to remedy, and to prevent, the recurrence of the injustices of this world.