Presentation Brothers’ ‘Monday at the Monastery’ talks a big hit

Mondays at the Monastery

Next week’s ‘Monday at the Monastery’ talks in Glasthule, Co. Dublin will feature two lay workers with the Presentation Bothers’ Youth and Evangelisation Ministry.

Jemma Halpin of the Cork Youth Ministry is to speak, as is John Quinn, who has been organising the series in Dublin attended by 40–70 participants each week during Advent.

For the first time, talks can be viewed on the Presentation Brothers’ website. Interviews about the series have featured on Spirit Radio.

The ‘Monday at the Monastery’ initiative was started in 2013 by the Presentation Brothers in Glasthule as part of a refocus on their mission.

“We try to get speakers who have a relevance to people,” said John Quinn, Evangelisation Officer, Presentation Brothers, Glasthule.

“For the Year of Mercy we had John Waters talking on different themes of Mercy. This year in Advent we have the idea of faith and life coming together. Where faith meets modern life is the overall theme.” 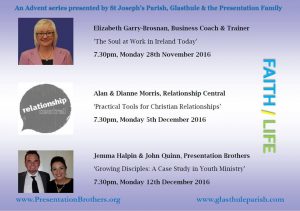 One talk by business coach and trainer, Elizabeth Garry-Brosnan, focused on ‘The Soul at work in Ireland today’. Alan and Dianne Morris spoke on marriage and parenting.

There is a strong sense of community among those from the parish and community in Glasthule who attend the sessions. There has also been an outreach to younger people to encourage them to attend the Monday talks as well as other events.

While the Presentation Brothers have been known for their tradition of working in schools, and this continues under a schools trust, they are now getting more involved in other work.

John Quinn took up his post as Evangelisation Officer more than a year ago.

“One of the things that drew me to this job is the fact that the Presentation Brothers are really trying to re-engage with their mission which is to form Christ in the young, and the way that they do that is through youth ministry and the evangelisation,” he explained.

“Really what the Presentation Brothers are trying to do now is to step out and be bold and creative as [Pope] Francis has asked.”

John Quinn was working in youth ministry in a parish in Wimbledon in London, but wanted to return to Ireland with his wife. He told CatholicIreland.net that he could not believe when the job that he is passionate about came up, and it was in the location where he originally came from in South County Dublin.

During his four years in the UK, he learned about the Church there and how it is what he called an ‘opt in’ Church.

“You had to be more creative and get out and engage with people to try to bring them into a relationship with Christ,” he explained.

He added that in Ireland “we suppose everybody is Catholic and that is maybe where some of our problems come from. So we are trying to re-engage and try new ways to bring people into that relationship [with Christ], and moving on from the culture of Catholicism into intentional Catholicism eventually.”

The next ‘Mondays at the Monastery’ event is on 12 December and events will resume again during Lent 2017 and later on in May.

In Cork the Presentation Brothers’ Youth Ministry includes ‘Movies with Meaning’, which involves looking at different films with young people and encouraging them to engage in discussion and think about them more deeply.