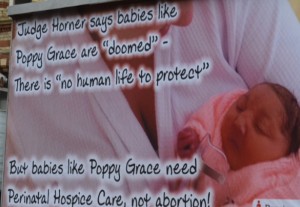 Precious Life has reacted swiftly to news that a number of Alliance Party members in Northern Ireland’s Legislative Assembly are bringing forward legislation to amend the Criminal Justice Bill next week to allow for abortion in the case of babies with life-limiting conditions.

In addition, Green Party leader, Steven Agnew MLA, has brought forward a proposed amendment to legalise the abortion of children conceived in rape.

“Shockingly, these proposed amendments are due to be considered next Tuesday 9 February giving us little time to counter this brutal attack against the most vulnerable in our society,” said Bernadette Smyth, Director of Precious Life.

The pro-life group has appealed to the public to lobby MLAs in their constituencies either by phone, email or by calling to their offices, to oppose the legislation.

“Let them know that you will not be voting for them in the upcoming election if they vote in favour of any change in the law,” said Ms Smyth.

In addition Precious Life is holding a vigil at the main gates of Stormont Buildings on Monday 8 February at 7pm, the evening before the proposed amendments will be brought to the floor of the Assembly.

“It must be shouted from the rooftops that that the people of Antrim, Armagh, Down, Derry, Fermanagh and Tyrone say “NO” to the lethal discrimination of the most vulnerable and defenceless unborn children in Northern Ireland,” said Ms Smyth.

The proposed amendments come on the back of a High Court decision in December 2015.

The case was brought by Sarah Ewart was backed by the Northern Ireland human rights commission which advocates abortion in cases of rape, incest or serious malformation of a foetus.

Ms Ewart travelled to the UK for an abortion in 2013 when she discovered she was carrying a baby with anencephaly, a condition in which the brain has not developed properly.

The case challenged the almost total ban on abortions in Northern Ireland’s hospitals.

In December 2015, the High Court found that the current law on abortion in Northern Ireland was “incompatible” with human rights law but the judge said allowing abortions for victims of sexual crime and cases of fatal foetal abnormality under the present law “would be a step too far”.

At the end of January, Stormont’s justice minister, David Ford, lodged  an appeal against the High Court ruling saying he was concerned that a lack of “legal certainty” could lead inadvertently to abortion on demand.

In the meantime, proposals to allow an extension of abortion law in Northern Ireland (where abortion is only legal where the mother’s life is at risk, or there is a risk of permanent or serious damage to her mental or physical health) is coming before the Legislative Assembly.

The UK’s 1967 Abortion Act, under which over 180,000 abortions are performed each year in England and Wales, has never been extended to Northern Ireland and all the main local political parties oppose it.

Ms Smyth said if the motions were passed on Tuesday, “the most vulnerable and defenceless unborn children will be torn violently from their mother’s wombs or ‘delivered early’ and left struggling for breath in a cold and dark utility room until they die.”

The contact details of MLAs in the Northern Ireland Assembly may be accessed on the Precious Life website: http://preciouslife.com/campaigns/75/contact-details-of-the-18-constituencies-in-northern-ireland/