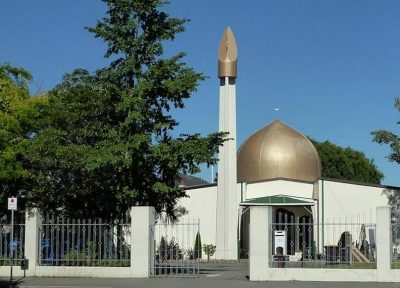 Masjid Al Noor, one of two mosques in Christchurch, New Zealand, where worshippers were targetted in a gun attack on Friday. (Photo: BeautifulMosque.com)

Prayers will be offered in Irish churches this weekend for the people of New Zealand following Friday’s horrific gun attack on two mosques in the city of Christchurch.

Members of Christchurch’s Muslim community had gathered peacefully at the Al Noor mosque and the Linwood mosque to pray. Friday is the biggest day of prayer during the week for followers of Islam.

New Zealand’s five Catholic bishops issued a joint message of condolence to the Muslim community there, saying: “We hold you in prayer as we hear the terrible news of violence against Muslims in mosques in Christchurch.

“We are profoundly aware of the positive relationships we have with Islamic people in this land, and we are particularly horrified that this has happened at a place and time of prayer.

“We are deeply saddened that people have been killed and injured, and our hearts go out to them, their families and wider community. We wish you to be aware of our solidarity with you in the face of such violence.”

The joint message concluded with the words: “Peace, Salaam.”

The Vatican’s Secretary of State Cardinal Petro Parolin said Pope Francis had invoked the divine blessings of comfort and strength upon the nation of New Zealand, saying His Holiness was “deeply saddened to learn of the injury and loss of life caused by the senseless act of violence at two mosques”.

Those sentiments were echoed by Bishop Kevin Doran of Elphin, who is chair of the Irish hierarchy’s Council for Life.

“All of us, of whatever religious tradition, can identify with what that might mean for a congregation gathered for worship,” Bishop Doran said.

“Responsibility for these attacks clearly rests with some violent individuals. At another level, however, there are serious questions to be answered, including in our own society, by those who unjustly blame the entire Muslim community for the extremism of some. It is just as unacceptable to speak and write in racist or sectarian terms against Muslims as it is to speak and write in similar terms about Christians.

Archbishop Diarmuid Martin of Dublin has asked that prayers be said at all St Patrick’s Day Masses this Sunday in remembrance for those who died and were injured. At St Mary’s Church, the pro-Cathedral, a short service of silence and reflection will be held before the 11am St Patrick’s Day Mass. The aim of the service will be to remember the victims and to renew the rejection of all forms of religious and racial intolerance by Christian believers.

The Archbishop invites people who will be in Dublin city on Sunday to join in the service.

In a press statement, the Archbishop expressed his concern about anti-Islamic sentiments being expressed in social media in Ireland and even in publications purporting to be of Catholic inspiration.

Across the globe, religious leaders have issued similar statements of sorrow, concern and solidarity. In London, Cardinal Vin Nichols, Archbishop of Westminster said: “The news of the massacre is deeply shocking and has caused us all great pain. We pray for the many victims, for the wounded and for the whole community, which has been severely affected by this act of terrorism. May God free us from these tragedies and sustain the efforts of all those who work for peace, harmony and coexistence.”

This attack in New Zealand is unprecedented in both scale and motivation. The country is seen as having a low crime rate and to enjoy excellent multi-cultural relations.