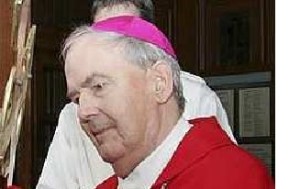 The Primate of All Ireland and the Archbishop of Dublin have expressed their “prayerful condolences” on the death of Bishop Dermot O’Mahony, Emeritus Auxiliary Bishop of the Archdiocese of Dublin.

In his statement, Archbishop Eamon Martin said that he personally did not know or work with the late Bishop O’Mahony, who preceded his time in the Bishops’ Conference.

He added that for many years he served the Conference faithfully in a number of pastoral responsibilities including with Cura, the Catholic Marriage Advisory Council, and in the areas of social welfare and in Catholic healthcare.

“At this sad time for Bishop Dermot’s family, brother clergy and friends, I pray for all those who mourn him and for the happy repose of his soul,” the Archbishop of Armagh said.

Bishop O’Mahony, who was eighty, was one of the bishops most strongly criticised in the Murphy Report over his handling of allegations of clerical sexual abuse in the archdiocese of Dublin.

The Murphy Report found that he had dealt “particularly badly with complaints” and said he was aware of complaints involving 13 of the priests in the representative sample studied by Judge Yvonne Murphy.

One finding was that Bishop O’Mahony failed to tell Archbishop Dermot Ryan about a number of complaints.

He gave one priest a reference for the diocese of Sacramento in California without explaining that the priest had had inappropriate contact, what was described as a ‘relationship’, with a 13-year-old girl, and that he shredded documents relating to this affair in 2001.

He was also found to have allowed a psychiatric report on clerical abuser, Ivan Payne, to be relied on by Archbishop Dermot Ryan and Archbishop Desmond Connell even though it was based on inaccurate information.

The Murphy report highlighted how he failed to tell either the National Rehabilitation Hospital, Dublin diocesan authorities or the Gardaí that Fr Noel Reynolds, who was a chaplain to the hospital at the time, had a problem with child sexual abuse.

Fr Reynolds later admitted sexually abusing over 100 children during his ministry at the hospital and in eight parishes.

Bishop O’Mahony was known to have rejected the findings of the Murphy report in relation to cover ups and challenged them publicly and privately.

He called on priests to “challenge the acceptance by media and current diocesan policy that a cover-up took place”.

In 2010, he was embroiled in a public row with Archbishop Diarmuid Martin over the archbishop’s call for senior clergy criticised in the report to resign.

In January 2010, Dr O’Mahony circulated correspondence between himself and Archbishop Martin in which the Archbishop accused him of “underestimating the degree of dismay and anger that people feel about the commission’s references to you”.

The Archbishop added that Dr O’Mahony showed neither remorse nor apology for the mishandling of clerical child abuse complaints.

He ordered Bishop O’Mahony to refrain from administering the sacrament of confirmation and cease his association with the Irish Pilgrimage Trust which takes children with special needs to Lourdes.

Dr O’Mahony, a canon lawyer, described Archbishop Martin’s letter as the “harshest communication I have ever received from anyone during my 34 years as a bishop and almost 50 years as a priest”.

Bishop O’Mahony was ordained a priest by Archbishop John Charles McQuaid in Clonliffe in 1960.

In 1975, he became one of the youngest bishops ever appointed in Ireland when he was made auxiliary bishop aged 40. He also served as Chancellor of the Archdiocese of Dublin for six years from May 1975.

At national level, he chaired the Irish Bishops’ Commission for Justice and Peace during a turbulent time in Northern Ireland.  He was active in supporting prison chaplains in the Maze prison.

The chaplains praised the support work carried out by Dermot O’Mahony at this time.

Bishop O’Mahony was also a member of the Dublin Diocesan College of Consultors and the Metropolitan Chapter. He retired as auxiliary bishop of Dublin on health grounds in June 1996 but despite this continued to play an active role in diocesan life.

He lived the latter years of his retirement in Swords. He is survived by his brother Gerry O’Mahony, sister-in-law Berna, niece Fiona, and nephew Tony. He was predeceased by another nephew, also Dermot.

His funeral will take place next week.

Archbishop Diarmuid Martin will receive the remains at 6.30pm on Monday 14 December in St Anne’s Church, Shankill in Dublin.

The Funeral Mass will take place at 12 noon on Tuesday 15 December with burial afterwards to Shanganagh cemetery.