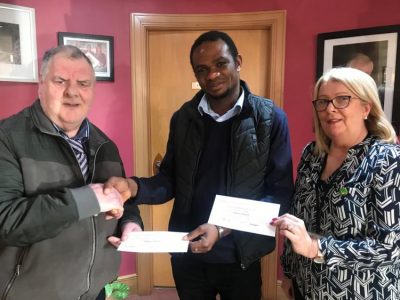 In the last six weeks, the Portlaoise Parish weekly lotto has paid out six €10,000 jackpots in a row and the total pay-out to lotto winners in the last two months has been €83,000, with an additional €6,000 paid out to sellers of winning tickets.

Parish priest and lotto organiser Msgr John Byrne said he is delighted for the lucky winners, but he does admit that he would rather there weren’t as many winners in such a short period. “I have great faith in God that he’ll turn it around for us,” he said, while also displaying a canny knowledge for the statistics surrounding chance.

“You will get runs of big wins like this – that is the nature of a random draw,” he said. “It’s entirely possible that we would have 10 jackpot winners in a row, just as we have had long periods where nobody has won the jackpot prize. Some people say ‘That’s the law of averages’, but there is no such law.”

The mathematical monsignor was making reference to a common gamblers’ fallacy that if a certain chance event occurs so many times, the law of averages means that the opposite must occur so many times too. In fact, every random lotto draw is independent of the others, so what happened before has no bearing on future outcomes.

Indeed, the odds are that, more usually than not, the parish lotto jackpot will not be won. Participants have to pick four numbers from one to 31 when they enter, so the odds of getting the four winning numbers in any one draw are 1:755,160.

It’s this level of odds that has ensured that the local lotto provides valuable income to support the wide range of activities taking place in this very busy parish. “Since 2001, we have spent €6m in developing the parish and the lotto has played a large part in that,” said Msgr Byrne.

In 2001, Portlaoise Parish opened a new parish centre next to Sts Peter and Paul Church at a cost of €2.5m. It hosts activities for nine different parish organisations and more than a dozen community groups.

“A lotto, if the circumstances are right, can be a very useful contributor to parish funds,” said Msgr Byrne. “As well as our own lotto, we also organise the Kildare and Leighlin Co-op Lotto, which raises funds for other parishes in the diocese.

“Yes, there will be times when there is a succession of jackpots – and we will always pay them out – but in the long run, if run properly, a lotto will always earn funds.”