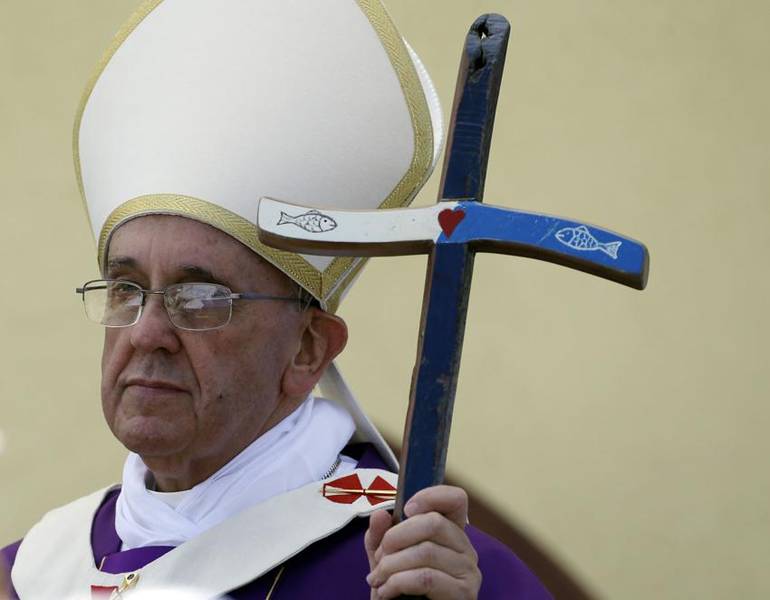 Pope Francis has said he wept when he heard reports of Christians being crucified.

Speaking on Friday morning at Mass in the Domus Santa Marta, the Pope lamented that there are still those who “kill and persecute in the name of God” and “in some countries you can still go to jail for possessing a Gospel.”

“I cried when I saw reports on the news of Christians crucified in a certain country, that is not Christian,” the Pope said.

Images have been circulating in the media in recent days of a number of men bound to wooden crosses, allegedly being crucified in Syria.

The gory images were posted on Twitter and showed two men being publicly crucified in the Syrian town of Raqqa, allegedly by members of an Islamic extremist group.

The identity and religious faith of the persons pictured have not been confirmed, nor has it been confirmed whether they were actually killed from crucifixion.

One appears to have been shot in the head and then attached to a cross.

The Islamic State of Iraq and the Levant [ISIL], a jihadist group, has claimed responsibility for the public crucifixions allegedly on Tuesday.

The ISIL shared the photos of the crucified men, bloodied and hanging from crosses at the main roundabout in Raqqa.

The ISIL is a radical Islamic group known for its extremism. It claimed the men were crucified for attempting to throw a grenade at an ISIL fighter at the Naim roundabout in Raqqa.

In his homily on Friday, Pope Francis referred to Jesus’s love for people evidenced in the Gospel passage on the multiplication of the loaves and fishes.

Jesus “speaks, preaches, loves, accompanies, travels on the path with people, meek and humble,” the Pope said. He is aware of the needs of the people, and he serves them, the Pope added.

Underlining that the authority with which he speaks is “the power of love,” Pope Francis contrasted it with the jealousy of the religious authorities in Christ’s time, caught up in “cold, hard legality.”

“This is a really bad attitude to have,” he explained, pointing out that the father of envy is the devil, and it was through his envy and jealousy that evil entered the world.

The Pontiff said encouragement could be drawn from the “joy of witness,” illustrated by the Christian martyrs and he noted that “today there are still so many” martyrs in the world.

“Just think that in some countries, you can go to jail for just carrying a Gospel. You may not wear a crucifix or you will be fined.”

“But the heart rejoices,” he underscored, reflecting on “the joy of so many of our brothers and sisters who have felt this joy in history, this joy that they were counted worthy to suffer dishonour for Christ’s name.”