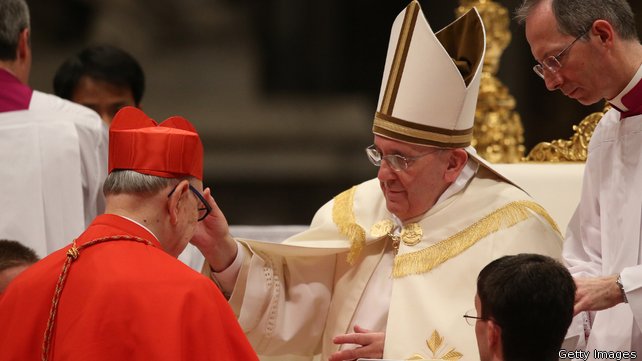 He warned the new batch of prelates that “A Cardinal enters the Church of Rome, not a royal court.”

Presiding over Mass in St Peter’s Basilica on Sunday, a day after the 19 bishops were added to the College of Cardinals, the Pontiff prayed, “May all of us avoid, and help others to avoid, habits and ways of acting typical of a court.”

Elsewhere in his homily, the Pope addressed his “Dear brother Cardinals” telling them that the Lord Jesus and Mother Church ask them “to witness with greater zeal and ardour to these ways of being holy.”

He told them, “It is exactly in this greater self-gift, freely offered, that the holiness of a Cardinal consists.”

“We love, therefore, those who are hostile to us; we bless those who speak ill of us; we greet with a smile those who may not deserve it.”

“We do not aim to assert ourselves; we oppose arrogance with meekness; we forget the humiliations that we have endured.”

“May we always allow ourselves to be guided by the Spirit of Christ, who sacrificed himself on the Cross so that we could be “channels” through which his charity might flow.

Pope Francis also highlighted the need for unity among the Church’s bishops.

“I ask you to remain close to me, with your prayers, your advice and your help. And I ask all of you, bishops, priests, deacons, consecrated men and women, and laity, together to implore the Holy Spirit, that the College of Cardinals may always be ever more fervent in pastoral charity and filled with holiness, in order to serve the Gospel and to help the Church radiate Christ’s love in our world.”

In his homily at Saturday’s consistory, the Pope asked the cardinals to avoid rivalries and factions.