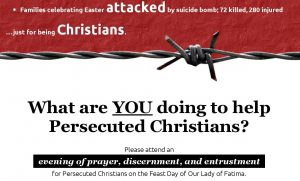 On St Stephen’s Day, Pope Francis recalled the heroic sacrifice of the Church’s first martyr and appealed for prayers for persecuted Christians around the world.

Speaking ahead of the Angelus on Monday, the Pontiff said St Stephen had been stoned to death “because he confessed his faith in Jesus Christ, the Son of God.”

“The only begotten Son who comes into the world invites every believer to choose the path of light and life,” Pope Francis told pilgrims gathered in St Peter’s Square.

“This is the profound meaning of his coming among us: loving the Lord and obeying his voice, the deacon Stephen chose Christ, [who is] Life and Light for every man.”

The Pope stressed that Stephen, by choosing the truth, “became at the same time the victim of the mystery of evil present in the world – but Christ has conquered.”

Of the plight of Christians suffering for their faith the Pope said, “Today too the Church, to bear witness to the light and the truth, is experiencing severe persecution in different places, up to the supreme test of martyrdom.”

He continued, “How many of our brothers and sisters in faith suffer abuse, violence, and are hated because of Jesus. Today we want to think about them and be close to them with our affection, our prayer, and also our tears.”

Departing from his prepared text, Pope Francis suggested that today’s martyrs are greater in number than those of the first centuries. “When we read the history of the early centuries, here in Rome, we read about so much cruelty towards Christians. I tell you, there is this same cruelty today, and in greater numbers with Christians.”

He noted that on Christmas Day the persecuted Christians in Iraq celebrated Christmas in their destroyed Cathedral. “[Theirs] is an example of fidelity to the Gospel,” he praised.

“Despite trials and dangers, they bear witness with courage that they belong to Christ, and they live the Gospel, dedicated to the least, the most forgotten, doing good to all without distinction; they bear witness to charity in truth.”

One of those persecuted Christians is mother of five, Asia Bibi, who spent her seventh consecutive Christmas in solitary confinement in jail in Pakistan – a country the United Nations has described as “one of the worst situations in the world for religious freedom”.

A member of Pakistan’s Christian minority, which totals just 1.6% of the population, 45-year-old Asia Bibi was jailed after being found guilty of breaching Pakistan’s blasphemy laws.

Despite a direct intervention by Pope Francis, who received a delegation of family and friends of Bibi’s at the Vatican, she remains in jail.

It is claimed that in June 2009 Asia Bibi shared a bowl of water with fellow workers in a field, about 48 km from Lahore, where they were working as farm labourers.

An argument erupted after some of the other women felt it was sacrilegious for Muslims to share the cup with a Christian.

The allegations escalated into a charge of blasphemy, when some of Asia Bibi’s fellow workers accused her of insulting the Prophet Muhammad.

Despite serious concerns over the lack of evidence and inconsistent testimonies, large crowds celebrated Bibi’s conviction in November 2010.

Meanwhile, the Prince of Wales last week released a message denouncing the “evil” of religious persecution.

The Prince’s message was broadcast on BBC Radio 4’s ‘Thought for the Day’. It was inspired by Aid to the Church in Need’s recently released Religious Freedom in the World 2016 Report.

Prince Charles referred to the report’s key finding that extremism is seeking to eliminate all types of religious diversity.

He hit out at the persecution of Christians, Yazidis, Jews, Ahmadis, Baha’is and other groups and stressed how for some people religious freedom is a daily stark choice between life and death.

The Prince, who has also made a video recording of his message exclusively for Aid to the Church in Need, opens his remarks by giving an account of how, at a meeting to discuss the report’s findings, he received a first-hand account of persecution from Syria-based Jesuit priest Father Ziad Hilal.

Referring to how the newborn Jesus Christ and his family fled persecution – as did the Prophet Mohammed more than six centuries later – the Prince concludes his message by paying tribute to minority faith groups who today are seeking sanctuary abroad.

The Prince of Wales’ Christmas message is available on the Aid to the Church in Need UK website: www.acnuk.org/hrhprincecharlesmessage.

Aid to the Church in Need’s Religious Freedom in the World Report is available on: www.religion-freedom-report.org.