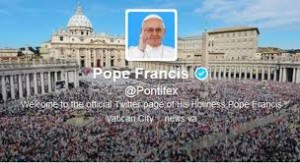 Pope Francis on Sunday led tens of thousands of pilgrims in a silent prayer for the victims of the catastrophic Typhoon Haiyan which has left as many as 10,000 people dead in the Philippines.

The category 5 super-typhoon, one of the worst on record, struck the country early on Sunday morning, leaving a trail of destruction in its wake affecting some 9.5 million people over nine regions of the Visayas. Leyte island bore the brunt of the storm.

In a tweet on Sunday, the Pope called for prayers, tweeting: “I ask all of you to join me in prayer for the victims of Typhoon Haiyan / Yolanda especially those in the beloved islands of the Philippines.”

In a telegram expressing condolence to the President of the Philippines, Archbishop Pietro Parolin, Vatican Secretary of State, expressed the Pontiff’s solidarity with those affected by the typhoon.

In it, the Archbishop said the Pope was “Deeply saddened by the destruction and loss of life caused by the super typhoon,” and expressed his “heartfelt solidarity with all those affected by this storm and its aftermath.”

The telegram said the Pontiff was “especially mindful of those who mourn the loss of their loved ones and those who have lost their homes.”

“In praying for all the people of the Philippines, the Holy Father likewise offers encouragement to the civil authorities and emergency personnel as they assist the victims of this storm. He invokes divine blessings of strength and consolation for the Nation.”

During Sunday’s Angelus in St Peter’s Square, Pope Francis again prayed for the people of the Philippines.

He first called for silent prayer, and then led the faithful in a recitation of the Hail Mary. He urged the pilgrims to help their brothers and sisters in the Philippines in practical ways, as well as through prayer.

“Unfortunately, the victims were many and the damage enormous,” Pope Francis said. “Let us pray a moment in silence, to the Madonna, for these our brothers and sisters,” he asked.

The Pontiff then exhorted, “let us try also to reach out to them with practical help,” to which the crowds in St Peter’s Square responded by clapping in agreement.