In his homily at the shrine of the Virgin of Caacupe, the Pope linked his admiration of Paraguayan women with his devotion to Our Lady. 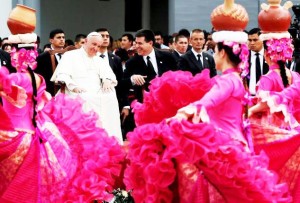 On the last stop of his a three-nation tour of South America, Pope Francis on Saturday praised the sacrifices made by Paraguay’s “glorious” women over the course of the country’s history.

In his homily at the shrine of the Virgin of Caacupe, the Pontiff said, “I would like especially to mention you, the women, wives and mothers of Paraguay, who at great cost and sacrifice were able to lift up a country defeated, devastated and laid low by war.”

He described them as “keepers of the memory, the lifeblood of those who rebuilt the life, faith and dignity of your people”.

Elsewhere, the Pontiff said in his homily, “God bless your perseverance. God bless and encourage your faith. God bless the women of Paraguay, the most glorious women of America.”

He linked his admiration of Paraguayan women with his devotion to Our Lady.

The Virgin, he said, endured much suffering over the course of her life – from the birth of Jesus, where there was no house, no dwelling to receive her Son, no place where she could give birth, no family close by. “She might well have asked herself of God, ‘Where is he now?’” he said.

The Pope also highlighted the difficulties in the flight to Egypt, the Egyptian exile, and at the foot of the cross – staying with her child even to his death on the cross. But then she encouraged and supported the disciples.

“We look at her life, and we feel understood, we feel heard,” he said.

Her life testifies that God does not deceive us, or abandon his people, even in moments or situations when it might seem that he is not there.

Mary was the first of her Son’s disciples and in moments of difficulty she kept alive the hope of the apostles. A woman attentive to the needs of others, she could say – when it seemed like the feast and joy were at an end – “they have no wine” (Jn 2:3), Pope Francis commented.

The Pope said Paraguayan women would have asked themselves the question “Where is he now?” as they confronted the devastation of their country and the massacre of their population – reduced by 70 percent – in the Triple Alliance War, 1864-1870, which Paraguay fought against Argentina and its allies Brazil and Uruguay.

“The women, wives and mothers of Paraguay, were able – at great cost and sacrifice – to lift up a country, defeated, devastated and laid low by war”, he said.

During Mass, Pope Francis prayed the Our Father in Guarani, the language of Paraguay’s indigenous people, which is spoken by 80 percent of the population.

Caacupe is located about 55kms east of the Paraguayan capital Asuncion.

At the end of Mass, it was declared that the church of Caacupe has been granted the status of a minor Basilica, which confers certain privileges, such as the use of the crossed keys papal symbol on banners and furnishings, and the granting of plenary indulgences for those who pray in the basilica on certain days.

On his arrival in Paraguay on Friday, Pope Francis called for the promotion of the common good and encouraged efforts to strengthen peace and democracy in the nation.

He said helping the poor and needy should be given priority of place.

On Saturday, Pope Francis urged representatives of civil society in Paraguay not to be closed in on themselves and but work together with others using dialogue to build a more inclusive society.

He warned those listening to not just take their “own slice of the cake” but discuss, think, and discover together a better solution for everybody.