Pope pops into Burger King to vest for Mass 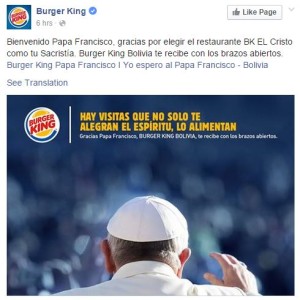 Huge crowds greeted Pope Francis as he was driven through the Bolivian capital Santa Cruz on Thursday.

By the time the popemobile reached Christ the Redeemer Square where the Pope was due to celebrate Mass, his escorts realised the Pontiff needed somewhere to put on his vestments.

They rushed ahead and asked at a nearby Burger King, which was closed, whether they could use the premises for a short time. Manager Alfredo Troche said he was only too happy to oblige.

Later the company wasted no time in letting the world know of the papal visit.

Even before Mass had ended, the restaurant put a post on Facebook welcoming Pope Francis and thanking him “for choosing the BK restaurant as your sacristy”.

The entry also included an image showing Pope Francis under a Burger King logo and the words: “There are visits that don’t just bring joy to your spirit, but also feed it.”