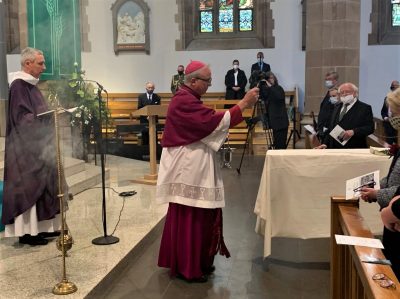 Messages and words of condolence from Pope Francis, the Dalai Lama, former US president Bill Clinton and Bono were read out at the funeral Mass of John Hume in St Eugene’s Cathedral, Derry on Wednesday.

Bishop Donal McKeown told Mr Hume’s family – Pat, Thérèse, Áine, John and Mo – who were present in the cathedral and his son Aidan, who watched from Boston, as he prevented from attending by the Covid-19 restrictions, as well as President Michael D. Higgins, the Taoiseach, Northern Ireland’s First Minister, Arlene Foster, and Deputy First Minister, Michelle O’Neill that the Pope sent all who mourn John Hume’s loss the assurance of his prayers.

The message was sent by the Vatican’s Secretary of State, Cardinal Pietro Parolin, on behalf of Pope Francis

In his message, the Pontiff said that he was mindful of the Christian faith that inspired John Hume’s “untiring efforts to promote dialogue, reconciliation and peace among the people of Northern Ireland”.

The revered architect of Northern Ireland’s peace process and Nobel Peace Laureate died on Monday aged 83 after a long battle with dementia. Due to the Coronavirus pandemic, Mr Hume’s family appealed to the people of Derry and beyond not to come to St Eugene’s Cathedral where numbers were tightly restricted. Many political representatives from across the island of Ireland, Britain and beyond were also unable to attend due to the restrictions.

His Holiness, the Dalai Lama, recalled in his message meeting John Hume during one of visits to Northern Ireland. He said Mr Hume’s “deep conviction in the power of dialogue and negotiations in resolving the problem in his homeland has been an example of non-violent resolution of issues”.

“It was his leadership and his faith in the power of negotiations that enabled the 1998 Good Friday Agreement to be reached. His steady persistence set an example for all of us to follow.”

“Although my fellow Nobel laureate is no longer with us, his message about peace and nonviolence in the resolution of conflict, no matter how protracted or difficult it may seem to be, will long survive him. He lived a truly meaningful life,” the Buddhist spiritual leader said.

In his homily, Fr Paul Farren likened John Hume to the Good Samaritan who never kept a distance or passed by on the other side of the road. “He stopped. He showed compassion. He got involved. He gave dignity and he gave life to so many people.”

“In a time in our world when often small mindedness and self-focus seems to be the driver, John never put anybody or any specific group first. He put everybody first.”

“He didn’t focus on difference and division. He focused on unity and peace and giving that dignity to every person.”

Fr Farren stressed, “We should never underestimate how difficult it was for John to cross the road and do what was intensely unpopular for the greater good. It was compassion – a compassion that bubbled over in the cemetery in Greysteel that drove John on the final and often lonely and always difficult road to peace.”

“Even in the darkest moments, when people would have been forgiven for having no hope, John made peace visible for others. His vision revealed what could be and with time and determination and single-mindedness and stubbornness he convinced others that peace could be a reality.”

“If ever you want to see a man who gave his life for his country, and his health, that man is John Hume. The world knows it. He is the only person in the world to have received the Noble Peace Prize, the Gandhi Peace Prize and the Martin Luther King Peace Prize. Pope Benedict XVI made him a Knight Commander of the Papal Order of Saint Gregory the Great.”

Noting that John Hume was a proud Derry man first and foremost, Fr Farren said his aim was to bring life and prosperity to the city and to lift people out of poverty. “He did everything possible to make that a reality. He always said his proudest achievement was the establishment of the Credit Union.”

The administrator of St Eugene’s said his fondest memories of John Hume related to the cathedral.

“In his retirement and as his health declined every day possible John came to Mass and every evening, and this is my fondest memory, he came over here and sat at the back and prayed quietly. In all the houses he was in White houses and houses of parliaments and many others it was in this house, the house of God, that he found greatest peace. It was in this house that John recognised the presence of God and his need for God – for his mercy – for his love. Here before his God the humility of John was plain to be seen.”

“Today we truly give thanks to God for the gift of John Hume and for all the gifts that so many people have received because of the remarkable life that he has lived and the courage and determination that he has shown.”

“We give thanks to God for the gift of life itself that so many people have today simply because of John’s vision of peace, commitment to peace and to making peace a reality. Because make no mistake about it – there are people alive today who would not be alive had it not been for John’s vision and his work.”

Fr Farren also thanked John Hume’s family who had made “massive sacrifices” for peace. “Your father and your grandfather couldn’t be at home too much because there were too many people along the way home that needed help. He couldn’t pass anybody. He brought many of them home.”

He also prayed for Pat Hume who had stood behind John to defend him and support him.

“She stood beside him to love him and accompany him even in the most difficult times and when his health failed and his mind got weaker she walked in front of him to lead him. Pat encircled John with love, compassion and support and it was your presence that made his work possible. When the history of Ireland is written if Pat Hume’s name is not beside John’s it will be an incomplete history.”

“Jesus tells us – ‘Blessed are the peacemakers they shall be called children of God’. Today we can be confident that a son of God has gone home. John lived his faith in the most practical way. His favourite gospel was the Good Samaritan. It was the Gospel of Jesus Christ and Catholic Social teaching that shaped his work for peace.”

Musician Phil Coulter played his composition ‘The Town I Loved So Well’, a favourite of John Hume’s, at the end of the Mass.