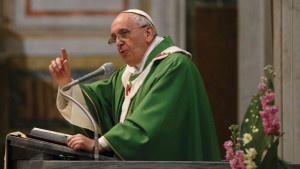 Pope Francis has paid tribute to the mission of St Patrick, the Apostle to Ireland, for his spiritual stamina.

“His spiritual stamina stirs you, dear young people, to be consistent with your faith; his trust in Christ the Savior sustains you, dear sick and infirm people, in times of great difficulty; and his missionary dedication reminds you, dear newlyweds, of the importance of the Christian education of your children,” Pope Francis said.

Meanwhile, in New York, where one of the biggest parades in the world outside Ireland takes place annually on 17 March, a car used by Pope Francis during his visit to the US last September took part in the Big Apple’s parade.

Mgr Robert Ritchie, the rector of St Patrick’s Cathedral, drove the car to the cathedral where it was greeted by Cardinal Timothy Dolan of New York Archdiocese.

The car was then driven along the rest of the parade route.

The Fiat 500 sedan is to be put up for auction on the site charitybuzz.com.

The proceeds will be used to support Catholic schools in the archdiocese, Catholic charities, Catholic Relief Services and the Catholic Near East Welfare Association, according to the Archdiocese of New York.