Home > News > Turkey hits back at Pope over Armenian genocide

Turkey hits back at Pope over Armenian genocide 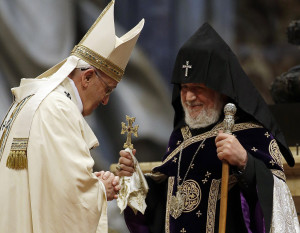 Pope Francis is greeted by the head of Armenia’s Orthodox Church Karekin II, during an Armenian-Rite Mass on the occasion of the commemoration of the 100th anniversary of the Armenian Genocide, in St Peter’s Basilica, at the Vatican, Sunday, April 12, 2015. (AP Photo/Gregorio Borgia)

Turkey has recalled its ambassador to the Holy See in response to Pope Francis’ statement on Sunday in which he described the massacre of one and a half million Armenians a century ago as “the first genocide of the 20th century”.

Speaking at the start of the Armenian rite Mass in St Peter’s, the Pontiff warned that “Concealing or denying evil is like allowing a wound to keep bleeding without bandaging it”.

The Mass, which recalled the centenary of the mass killings by Ottoman Turks, was attended by the President of Armenia, Serž Azati Sargsyan, Catholicos Karekin II, Catholicos Aram I, and Patriarch Nerses Bedros XIX, as well as scores of Armenian prelates and priests.

In a later message to Armenians, the Pope called on heads of state and international organisations to recognise the truth of what happened in 1915-16 and oppose such crimes “without ceding to ambiguity or compromise”.

The response from Turkey was swift. Officially the country does not acknowledge that a genocide took place and as recently as 2005, writers such as Nobel Laureate Orhan Pamuk was threatened with jail for ‘insulting Turkishness’ by acknowledging the genocide.

The Pope said on Sunday that it was his duty to honour the memory of the innocent men, women and children who were “senselessly” murdered by Ottoman Turks in the genocide.

He said that humanity had lived through “three massive and unprecedented tragedies” in the last century.

“The first, which is widely considered ‘the first genocide of the 20th century’, struck your own Armenian people,” he said.

Pope Francis also referred to the crimes “perpetrated by Nazism and Stalinism” and said other genocides had followed in Cambodia, Rwanda, Burundi and Bosnia.

But Turkey immediately summoned the Vatican’s ambassador to Ankara for an explanation, and then later recalled its ambassador from Rome.

Turkey’s Foreign Minister Mevlut Cavusoglu tweeted: “The Pope’s statement, which is far from the legal and historical reality, cannot be accepted.”

“Religious authorities are not the places to incite resentment and hatred with baseless allegations,” he added.

However, most historians, even Turkish historians, now admit that genocide did take place but the State continues to deny this, saying the number of deaths was much smaller than 1.5 million and accusing Armenians of inflating the figure.

Countries such as Argentina, Belgium, Canada, France, Italy, Russia and Uruguay have recognised the genocide.

Turkey maintains that many of the dead were killed in clashes during World War I, and that ethnic Turks also suffered in the conflict.

Pope Francis delivered the following message to Armenians on Sunday:

A century has passed since that horrific massacre which was a true martyrdom of your people, in which many innocent people died as confessors and martyrs for the name of Christ (cf. John Paul II and Karekin II, Common Declaration, Etchmiadzin, 27 September 2001).

Even today, there is not an Armenian family untouched by the loss of loved ones due to that tragedy: it truly was “Metz Yeghern”, the “Great Evil”, as it is known by Armenians.

On this anniversary, I feel a great closeness to your people and I wish to unite myself spiritually to the prayers which rise up from your hearts, your families and your communities.

Today is a propitious occasion for us to pray together, as we proclaim Saint Gregory of Narek a Doctor of the Church.

Saint Gregory of Narek, a monk of the tenth century, knew how to express the sentiments of your people more than anyone.

He gave voice to the cry, which became a prayer, of a sinful and sorrowful humanity, oppressed by the anguish of its powerlessness, but illuminated by the splendour of God’s love and open to the hope of his salvific intervention, which is capable of transforming all things.

“Through his strength I wait with certain expectation believing with unwavering hope that… I shall be saved by the Lord’s mighty hand and… that I will see the Lord himself in his mercy and compassion and receive the legacy of heaven” (Saint Gregory of Narek, Book of Lamentations, XII).

Your Christian identity is indeed ancient, dating from the year 301, when Saint Gregory the Illuminator guided Armenia to conversion and baptism.

You were the first among nations in the course of the centuries to embrace the Gospel of Christ. That spiritual event indelibly marked the Armenian people, as well as its culture and history, in which martyrdom holds a preeminent place, as attested to symbolically by the sacrificial witness of Saint Vardan and his companions in the fifth century.

Your people, illuminated by Christ’s light and by his grace, have overcome many trials and sufferings, animated by the hope which comes from the Cross (cf. Rom 8:31-39).

As Saint John Paul II said to you, “Your history of suffering and martyrdom is a precious pearl, of which the universal Church is proud. Faith in Christ, man’s Redeemer, infused you with an admirable courage on your path, so often like that of the Cross, on which you have advanced with determination, intent on preserving your identity as a people and as believers” (Homily, 21 November 1987).

This faith also accompanied and sustained your people during the tragic experience one hundred years ago “in what is generally referred to as the first genocide of the twentieth century” (John Paul II and Karekin II, Common Declaration, Etchmiadzin, 27 September 2001).

Pope Benedict XV, who condemned the First World War as a “senseless slaughter” (AAS, IX [1917], 429), did everything in his power until the very end to stop it, continuing the efforts at mediation already begun by Pope Leo XIII when confronted with the “deadly events” of 1894-96.

For this reason, Pope Benedict XV wrote to Sultan Mehmed V, pleading that the many innocents be saved (cf. Letter of 10 September 1915) and, in the Secret Consistory of 6 December 1915, he declared with great dismay, “Miserrima Armenorum gens ad interitum prope ducitur” (AAS, VII [1915], 510).

It is the responsibility not only of the Armenian people and the universal Church to recall all that has taken place, but of the entire human family, so that the warnings from this tragedy will protect us from falling into a similar horror, which offends against God and human dignity.

Today too, in fact, these conflicts at times degenerate into unjustifiable violence, stirred up by exploiting ethnic and religious differences.

All who are Heads of State and of International Organizations are called to oppose such crimes with a firm sense of duty, without ceding to ambiguity or compromise.

May this sorrowful anniversary become for all an occasion of humble and sincere reflection, and may every heart be open to forgiveness, which is the source of peace and renewed hope.

Saint Gregory of Narek, an extraordinary interpreter of the human soul, offers words which are prophetic for us: “I willingly blame myself with myriad accounts of all the incurable sins, from our first forefather through the end of his generations in all eternity, I charge myself with all these voluntarily” (Book of Lamentations, LXXII).

How striking is his sense of universal solidarity! How small we feel before the greatness of his invocations: “Remember, [Lord,]… those of the human race who are our enemies as well, and for their benefit accord them pardon and mercy… Do not destroy those who persecute me, but reform them, root out the vile ways of this world, and plant the good in me and them” (ibid., LXXXIII).

May God grant that the people of Armenia and Turkey take up again the path of reconciliation, and may peace also spring forth in Nagorno Karabakh.

Despite conflicts and tensions, Armenians and Turks have lived long periods of peaceful coexistence in the past and, even in the midst of violence, they have experienced times of solidarity and mutual help. Only in this way will new generations open themselves to a better future and will the sacrifice of so many become seeds of justice and peace.

For us Christians, may this be above all a time of deep prayer. Through the redemptive power of Christ’s sacrifice, may the blood which has been shed bring about the miracle of the full unity of his disciples.

In particular, may it strengthen the bonds of fraternal friendship which already unite the Catholic Church and the Armenian Apostolic Church.

The witness of many defenceless brothers and sisters who sacrificed their lives for the faith unites the diverse confessions: it is the ecumenism of blood, which led Saint John Paul II to celebrate all the martyrs of the twentieth century together during the Jubilee of 2000.

Our celebration today also is situated in this spiritual and ecclesial context. Representatives of our two Churches are participating in this event to which many of our faithful throughout the world are united spiritually, in a sign which reflects on earth the perfect communion that exists between the blessed souls in heaven.

I entrust these intentions to the Mother of God, in the words of Saint Gregory of Narek:

I entrust these intentions to the Mother of God, in the words of Saint Gregory of Narek:

“O Most Pure of Virgins, first among the blessed,

Mother of the unshakeable edifice of the Church,

Mother of the immaculate Word of God,

Taking refuge beneath your boundless wings which grant us the protection of your intercession, we lift up our hands to you, and with unquestioned hope we believe that we are saved”.

(Panegyric of the Theotokos)