Home > Featured > Bishops call for action after US mass shootings

Bishops call for action after US mass shootings 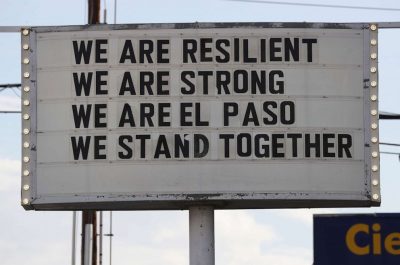 Bishops in the United States have called for action after three mass shootings in the past few days.

And Pope Francis on Sunday prayed for the “defenceless” victims of the shootings.

At the Angelus in St Peter’s Square, the Pontiff expressed his spiritual closeness and prayers for the victims, the wounded and the families affected by the bloodshed in Texas, California and Ohio.

At least nine people were killed and 26 were wounded by a gunman in body armour in Dayton, Ohio on Sunday.

The shooting in Ohio was the United States’ 22nd mass killing of 2019.

President Donald Trump has ordered flags to be flown at half-mast on all federal buildings in the US.

Authorities in Texas said they are investigating whether the killing spree in El Paso was a hate crime.

A manifesto posted online shortly before the shooting, which may be linked to the killer, expressed concern that an influx of Hispanics into the United States would replace ageing white voters, and potentially see Texas become a Democrat state in upcoming elections.

The president of the US Conference of Catholic Bishops in a statement co-signed with the chairman of the US Bishops’ Domestic Justice and Human Development committee said: “The lives lost this weekend confront us with a terrible truth. We can never again believe that mass shootings are an isolated exception. They are an epidemic against life that we must, in justice, face.”

“We encourage Catholics to pray and raise their voices for needed changes to our national policy and national culture as well.

“We call on all relevant committees of the United States Conference of Catholic Bishops to outline a reinvigorated policy agenda and pastoral campaign to address ways we can help fight this social disease that has infected our nation.”

Their statement concluded: “The Conference has long advocated for responsible gun laws and increased resources for addressing the root causes of violence. We also call upon the President and Congress to set aside political interests and find ways to better protect innocent life.”

In their statement on Saturday in response to the killings in El Paso, the US bishops said, “Something remains fundamentally evil in our society when locations where people congregate to engage in the everyday activities of life can, without warning, become scenes of violence and contempt for human life. The plague that gun violence has become continues unchecked and spreads across our country.”

They stressed that things must change. They called for “effective legislation that addresses why these unimaginable and repeated occurrences of murderous gun violence continue to take place in our communities”.

“As people of faith, we continue to pray for all the victims, and for healing in all these stricken communities. But action is also needed to end these abhorrent acts.”

Jesuit Fr James Martin tweeted, “I’m disgusted by our nation’s inability and unwillingness to protect life. God will call us to account for this. Gun control is a life issue.”