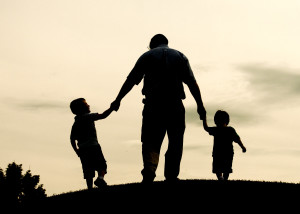 The absence of fathers from their children’s lives can have grave consequences Pope Francis warned on Wednesday during his weekly General Audience.

Speaking about the dignity and role of fathers, the Pope said there was a crisis of fatherhood in modern society.

In the past, the Pontiff said it was common for the image of the father to be presented as authoritarian and at times even repressive.

However, today, he said, there was a sense of uncertainty and confusion about the role of the father.

Pope Francis called on fathers to be present in the lives of their children pointing out that the absence of a ‘father figure’ can have grave consequences.

Recalling his experience when he was Bishop of Buenos Aires, Pope Francis said he was often struck by how caught up in their profession and self-realisation so many contemporary fathers are.

Without father figures, young people often feel ‘orphaned’, he said, and left adrift at a critical moment in their growth and development.

Calling on fathers to be responsible, he said that fathers are necessary as examples and guides for our children in wisdom and virtue.

Fathers also fall short when they forget they are fathers and instead strive to be companions who are “on par” with their children, he continued.

Fathers are called to fulfill an educational task: by word and example, they should offer principles, values, and rules of life that children need, just as they need food.

Civil society, too, has a fatherly task, but it has left children orphans who dream of entertainment and pleasures, who “are deluded by the god of money and denied true riches.”

Society itself, the Pope said, has a similar responsibility not to leave the young as orphans, without ideals, sound values, hopes and possibilities for work and for authentic spiritual fulfilment.

The Pope will reflect further on the beauty of fatherhood in his 3 February general audience.