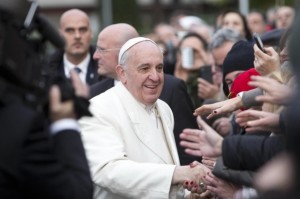 During his one-day trip to Molise, Pope Francis met personnel from the region’s university, and urged them to find creative solutions to unemployment, and he also thanked working mothers for their example.

“Another challenge was voiced by this good working mother, who also spoke on behalf of her family – her husband, her young child and the baby in her womb,” Pope Francis observed in his address to students and staff of the University of Molise in Campobasso.

“Hers is a plea for work and at the same time for the family. Thank you for this testimony! In fact, it is a case of trying to reconcile work with family life.”

Taking place in the university’s lecture hall, the talk given to the university personnel was the first event in Pope Francis’ one-day visit to the Archdiocese of Campobasso-Boiano in Italy’s southern Molise region.

Archbishop Giancarlo Maria Bregantini oversees the diocese, and was appointed by the Pope to write the meditations for this year’s Good Friday Via Crucis at the Colosseum. He is also known for his commitment in fighting against organized crime.

Beginning his address, the Pontiff thanked the university’s rector and authorities for their welcome, and greeted the professors, students and faithful gathered.

“My visit in Molise begins with this encounter with the world of work, but the place in which we find ourselves is the university. And this is significant,” he said.

“It expresses the importance of research and training in order to respond to the new and complex questions that the economic crisis poses, on a local, national and international level.”

Referring to humanity’s call to serve God in our daily work, the Pope stated that “a good training program does not offer easy solutions, but helps to have a more open and creative look in order to better value local resources.”

The Bishop of Rome then pointed out the importance of caring for creation, explaining that learning to truly respect it “is one of the greatest challenges of our time.”

He also drew attention to the growing phenomenon of working mothers, stating that theirs is a call “to work and at the same time to the family,” adding that their challenging balance of work and family “is a ‘critical’ point that allows us to discern, to evaluate the quality of the human economic system in which we find ourselves.”

Involved in this evaluation is also the question of working on Sundays the pontiff observed, stating that it is a question “which doesn’t only concern believers, but everyone, as an ethical choice.”

“The questions is: what do we want to give priority? The Sunday free from work – except those necessary services – is to say that the priority is not given to the budget, but to the human being, to freedom, to family rather than non-commercial relations, to friends in order for believers to have a relationship with God and their community.”

“Maybe it’s time to ask whether working on Sundays is true freedom.”

Pope Francis also directed words to the “many workers and entrepreneurs of this region,” and joined his voice to theirs in asking “that a ‘pact for work’ be implemented here.”

Explaining how he has seen the inhabitants of Molise “respond to the tragedy of unemployment by putting efforts together in a constructive way,” the Pope affirmed that “so many positions of work could be recovered through a concerted strategy with national authorities.”

“A ‘pact for work’ that knows how to take advantage of the opportunities offered by national and European regulations” would greatly help, he said, and encouraged the region’s citizens “to go down this road, which can bring good results here as well as in other regions.”

Concluding his address, the Pontiff thanked the university personnel for their gift of a painting that represents motherhood, stating that “Motherhood involves labour, but the pain of childbirth is oriented toward life, is full of hope.”

“I not only thank you for this gift, but more so for the testimony it contains: that of a labour full of hope.”