Pope Francis may be preparing to visit Sri Lanka 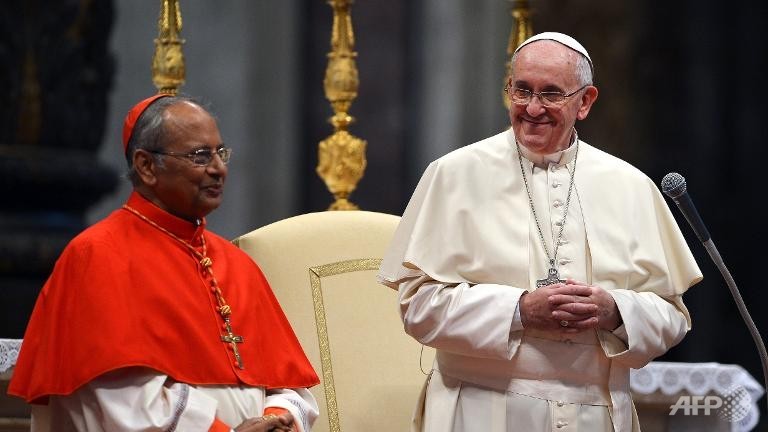 Speculation is mounting that Pope Francis may be poised to announce a visit to Sri Lanka after he told a group of Sri Lankan immigrants living in Italy that he welcomed an invitation to visit their country and added, “I think the Lord will grant us the grace.”

Separately, there is also speculation that a visit to South Korea is on the cards after the Pope gave an authorisation for 124 Koreans to be recognised as martyrs.

The 124 were among thousands of Koreans who perished for their faith in the 18th and 19th centuries.

The way is now paved for the 124 martyrs to be beatified in a solemn ceremony, the last formal step before sainthood.

Last month, the Vatican said a papal trip to South Korea in August was under consideration.

According to AsiaNews, a Vatican-affiliated missionary news agency, the beatification of the martyrs makes a pilgrimage to South Korea by Pope Francis “increasingly likely”.

A possible date for the beatification ceremony is 15 August and some commentators have suggested that if the Pope does oversee the ceremony, there is likely to also be a “special Mass for the reunification of the two Koreas” within the schedule.

Meanwhile, in his conversation with Sri Lankan Catholic immigrants on Saturday, the Pope spoke of the need to heal wounds from Sri Lanka’s 26-year civil war, which ended in 2009.

“Your homeland is called the Pearl of the Indian Ocean, on account of its natural beauty and its shape. They say that the pearl is formed from the tears of the oyster. Unfortunately, many tears have been shed in recent years, on account of the internal conflict which caused so many victims and so much damage.”

He urged Sri Lankans to take up the difficult challenge of healing wounds and he also spoke about the need for reconciliation.

“It is not easy, I know, to heal the wounds and cooperate with yesterday’s enemy to build tomorrow together, but it is the only path that gives hope for the future, for development and for peace.”

According to the ANSA news agency, the Pope thanked him, saying “I take up this invitation, and I believe that the Lord will give us the grace” to make the trip happen.

An estimated 6 percent of the country’s population are Roman Catholic.

During his conversation with the Sri Lankan delegation, the Pontiff recalled the circumstances that led to the consecration of Sri Lanka to the Blessed Virgin Mary.

In the midst of the dangers of the Second World War, the Archbishop of Colombo, Jean-Marie Masson, vowed to build a shrine to the Madonna if the island-nation were preserved from foreign invasion. After the war, in fulfilment of the vow, the Church in Sri Lanka built the Shrine of Our Lady of Lanka at Tewatte (outside the capital Colombo).

“Our Lady is always close to us,” the Pope said, “she looks upon each one of us with maternal love and accompanies us always on our journey. Do not hesitate to turn to her for every need, especially when the burden of life with all its problems makes itself felt.”

Concluding his remarks, Pope Francis assured the pilgrims of his prayers, entrusting them “to the maternal intercession of Mary, Our Lady of Lanka.”

The Pope is scheduled to undertake a three-day pilgrimage in late May this year to Jordan, Israel and the West Bank.