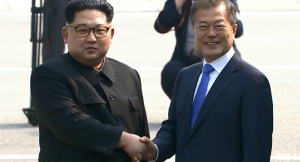 Kim Jong-un and Moon Jae-in at their meeting in April.

Pope Francis may be planning a trip to the world’s most secretive nation.

Kim Jong-un of the Democratic People’s Republic of Korea has invited the Pope to make a papal visit to his country.

The offer was conveyed verbally by South Korean President Moon Jae-in during his visit to the Vatican.

While the constitution of the Democratic People’s Republic of Korea officially guarantees freedom of religion, in practice it is an atheist state. All manifestations of religion have been outlawed by the government. Aid to the Church in Need (ACN) rates religious persecution levels in North Korea as “extreme”, with more than 200,000 Christians having gone missing since 1953. Some have been summarily executed, while others are believed to be held in political internment.

In the past, aid agencies such as Trócaire have claimed that the majority of North Korea’s population were facing hunger and famine, but the Pyongyang Government has been reluctant to let independent observers enter the country.

In April this year the presidents of the two Koreas met; and in June Kim Jong-un had an historic meeting with United States President Donald Trump.

The Vatican declined to comment on whether the Pope would accept the invitation. No pope has ever visited North Korea.