Up to six million turn out for papal Mass in Manila 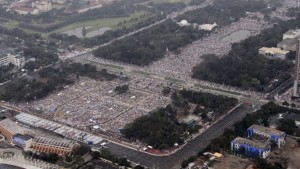 Up to six million people turned out in Manila on Sunday to greet Pope Francis as he celebrated the final major liturgy of his visit to the South East Asian country.

In his homily at the Mass in Rizal Park, the Pope warned that each child must be seen “as a gift to be welcomed, cherished and protected”.

He underlined that young people need our care so they will not be “robbed of hope and condemned to life on the streets.”

On the day the Filipino Church celebrates ‘Santo Niño’, the Pontiff urged Filipinos to look to the Christ Child, the protector of the Philippines, as their model, and reminded them of the importance of protecting the family.

He also urged them to work together to build “a world of justice, integrity and peace.”

Warning against the devil, “the father of lies” who hides his snares behind the appearance of sophistication, the allure of being ‘modern’ ‘like everyone else,’ the Pope said people are distracted, by “ephemeral pleasures and superficial pastimes” and “squander our God-given gifts by tinkering with gadgets,” and “squander our money on gambling and drink.”

He said that over the days of his visit he had listened to them sing the song: ‘We are all God’s children’.

“That is what the Santo Niño tells us. He reminds us of our deepest identity. All of us are God’s children, members of God’s family,” the Pope said.

Referring to the readings on Sunday, he said St Paul had told them that “we have become God’s adopted children, brothers and sisters in Christ. This is who we are. This is our identity. We saw a beautiful expression of this when Filipinos rallied around our brothers and sisters affected by the typhoon,” he commented.

The Argentine also noted that in the Gospel, Jesus welcomes children, embraces them and blesses them (Mk 10:16).

“We too need to protect, guide and encourage our young people, helping them to build a society worthy of their great spiritual and cultural heritage.”

“It was a frail child, in need of protection, who brought God’s goodness, mercy and justice into the world. He resisted the dishonesty and corruption which are the legacy of sin, and he triumphed over them by the power of his cross,” he said.

“Now, at the end of my visit to the Philippines, I commend you to him, to Jesus who came among us as a child. May he enable all the beloved people of this country to work together, protecting one another, beginning with your families and communities, in building a world of justice, integrity and peace.”