Pope Francis at Synod on Amazon

Pope Francis’ new Apostolic Exhortation has been described as a love letter to the Amazon and a little brother or sister of Laudato Sí’.

In Querida Amazonia or Beloved Amazonia, Pope Francis emphasises that he is offering his “own response” evoked by last year’s Synod on the Amazon. He explains that he does not intend to substitute or duplicate its Final Document, which he invites everyone to read “in full”. Pope Francis prays that the entire Church might allow itself to be “enriched and challenged” by it and that the Church in the Amazon might strive “to apply it”.

However, the issue that caused most comment is what some media are reporting as a U-turn on ordaining certain married men who are church leaders in the Amazon.

It had been reported that the majority of Amazonian bishops who attended a special Synod on the Amazon last year were in favour of ordaining these married men, and of looking into the possibility of ordaining certain women as deacons, to address a scarcity of priests in the region.

Instead, Pope Francis has called for bishops to encourage more vocations, for more missionaries to seek to serve in the region, and for greater involvement of the laity and women in the Church.

Ireland’s Archbishop Eamon Martin welcomed the Apostolic Exhortation of Pope Francis, stating: “It would be wonderful if some Irish priests, religious and lay missionaries were to consider offering even a five-year period of ministry to the Amazon.”

Fr Paddy Byrne, a parish priest in Co. Laois and a well-known blogger, tweeted: “I’m very disappointed that Pope Francis has backed away from permitting the ordination of married men [in the Amazon area]. The church will continue to die, even as so many women and men are willing to serve as leaders of the Eucharistic assembly.”

The Association of Catholic Priests (ACP) agreed with Fr Paddy and stated that his tweet “captures excellently” what most ACP members in Ireland “are thinking and saying today” about Pope Francis’ decision about married priests in the Amazon.

In a longer statement, Fr Mattie Long, ACP stated that Pope Francis “does not deal specifically with the issues of the ordination of women as deacons or married men as priests”. He added that “[r]eactions can be expected [to] be swift, and depending on each person’s expectations concerning the future of ministry, will be either very disappointed that there doesn’t seem to be any change planned, or reassured that the status quo is being maintained.”

He went on to state that there is much more in Pope Francis’ Beloved Amazon “that will need to be studied. His four great dreams for the Amazon region bear great consideration.”

A writer in The Tablet, Austen Ivereigh, wrote that Pope Francis had discerned a “third way” for the Amazon. He wrote: “In paragraph 104 the Pope observes that when pastoral workers propose ‘opposed forms of ecclesial organisation’ in response to challenges, it is likely that the true answer lies in ‘transcending the two approaches and finding other, better ways, perhaps not yet even imagined.’”

He points out that in Beloved Amazonia Pope Francis says that women who play a central role in Amazonian communities should be given leadership roles than do not entail ordination, and that “these services entail stability, public recognition and a commission from the bishop” that would also allow women to have a real and effective impact on the organisation, the most important decisions and the direction of communities “while continuing to do so in a way that reflects their womanhood”.

The writer suggests that the Pope is looking to a whole new kind of female-specific leadership in the Church.

The Presentation Sisters Union – North East Ireland published an article that stated that Pope Francis “has again surprised the world” with his document. It highlights how Pope Francis is on the side of justice for the region’s 33 million people, of whom 2.5 million are indigenous peoples, and for the protection of their lives, their cultures, their lands, the Amazon river and rain forests against powerful economic interests, both national and international, that risk destroying the people and the environment. 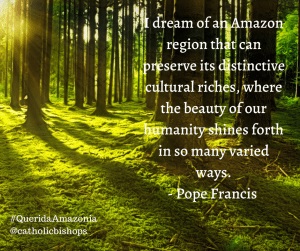 Archbishop Eamon Martin also touched on how Querida Amazonia aims to strengthen solidarity with brothers and sisters in a beautiful and vital part of the world.

He adds: “it is not just a document of interest to the peoples of the Amazon. It is also a call to action for all in our Church and in our world. It therefore picks up the concerns expressed all around the world, especially by our young people, that we must work together to respect creation and life, to promote the dignity of the human person, and to protect those who are most affected by environmental destruction. As the Holy Father states: ‘The equilibrium of our planet also depends on the health of the Amazon region.’”

In the exhortation, Pope Francis shares his dream for the Amazon region that fights for the rights of the poor; preserves its distinctive cultural riches; and jealously preserves its overwhelming natural beauty; and where the Christian communities might be capable of generous commitment, incarnate in the Amazon region.