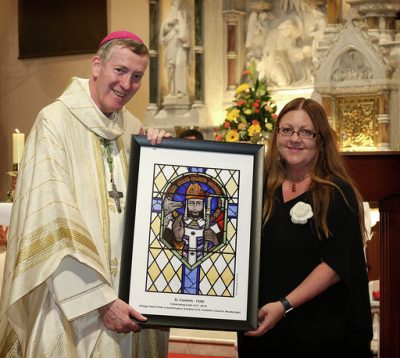 Bishop Denis Nulty is presented with a reproduction of a stained glass depiction of St Conleth from Newbridge parish church by Brenda Drumm of the parish council. Courtesy: Newbridge Parish

One of the highpoints of the weekend’s celebrations marking the 1500th anniversary of the death of St Conleth, the first Bishop of Kildare and Patron Saint of the Diocese of Kildare and Leighlin, was a special papal message praising the contribution of the bishop and abbot.

The weekend of celebrations began with Mass on Saturday 4 May in St Conleth’s in Newbridge, Co Kildare, as he is the patron saint of the parish.

St Conleth died on 4 May 519, and 1500 years later the people of Newbridge came together on his Feast Day to mark the anniversary of his death and to celebrate the vibrant parish life that has continued down the centuries in Newbridge.

Bishop Denis Nulty of Kildare and Leighlin was the principal celebrant and he was joined by priests and religious from Newbridge parish and around the diocese.

In the message the Pope said he joined with them in “giving thanks to Almighty God for the example of this saintly bishop and abbot” and he encouraged them “to remain rooted in fidelity to the Lord”.

The message was signed by Cardinal Pietro Parolin, the Vatican Secretary of State on behalf of the Pontiff.

It expressed the hope that the faithful of Kildare & Leighlin, as they “seek to proclaim the Gospel by following Christ in missionary discipleship”, would see each parish strengthened as a place where all can encounter “a community of communities, a sanctuary where the thirsty come to drink in the midst of their journey, and a centre of constant missionary outreach” (Evangelii Gaudium, 28). 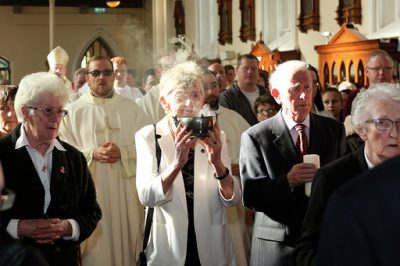 The Pope entrusted the people of Kildare and Leighlin to the intercession of Saints Conleth, Brigid and Laserian.

The message concluded, “The Holy Father cordially imparts his Apostolic Blessing as a pledge of strength and peace in the Lord.”

In his homily for the Mass on Saturday evening Bishop Nulty said the important message was the life Conleth led and the legacy he left behind, “a legacy we live out of and celebrate this night.”

He recalled Pope Francis’ words in his first Chrism Mass as Pontiff in which he used an image that he has returned to again and again and again: “the priest who seldom goes out of himself … misses out on the best of our people, on what can stir the depths of his priestly heart … this is precisely the reason why some priests grow dissatisfied, lose heart and become in a sense collectors of antiquities or novelties, instead of being shepherds living with the ‘smell of the sheep’. This is what I am asking you – be shepherds with the smell of sheep.”

Bishop Nulty continued, “Conleth has given a root to your faith, your Christian identity in these parts. Pope Francis in Christus Vivit reminds us that “roots are not anchors chaining to past times and preventing us from facing the present and creating something new. Instead, they are a fixed point from which we can grow and meet new challenges … we are sent today to proclaim the Good News of Jesus in a new age. We need to love this time with all its opportunities and risks, its joys and sorrows, its riches and its limits, its successes and failures”.

Bishop Nulty also warned that “There is always the temptation to despair, to sit on our hands, to feel our time has passed. As a church, as a faith community we can sometimes wallow in a feeling of being bruised and battered.” 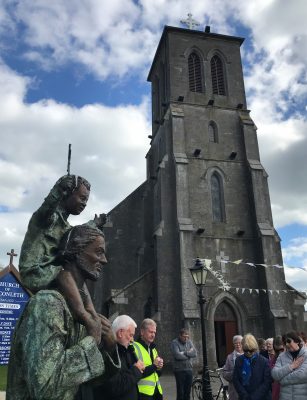 But he added, “Nothing could be further from the truth. We owe it to Conleth, and before him to Peter and before him, ultimately to Jesus, to proclaim this good news message, that Jesus is Risen and walks amongst us. He is still inviting us to breakfast. He is still calling us, like Conleth and Brigid, to follow Him.”

At the end of the Mass Bishop Nulty was presented with an image of a stained glass depiction of St Conleth from St Conleth’s parish church.

On Sunday 5 May a pilgrim walk took place from Newbridge parish church to Old Connell, where it is said Conleth lived in seclusion.

In years gone by, on the Sunday after St Conleth’s Day, a pilgrimage would take place from the parish church in Newbridge to Old Connell, about two miles outside the town.

This pilgrimage was revived this year for the St Conleth 1500 celebrations and more than 80 people took part in the pilgrim walk to what is now a historic graveyard, where a short prayer service and blessing of the graves took place.

Local historian Paul Cooke gave an overview of the stories of some of those who are buried in the graveyard, which is now sited in a modern stud farm.

The weekend of celebrations concluded on Monday night when the Papal Nuncio to Ireland, Archbishop Jude Thaddeus Okolo, was principal celebrant and homilist for the second night of the annual novena. 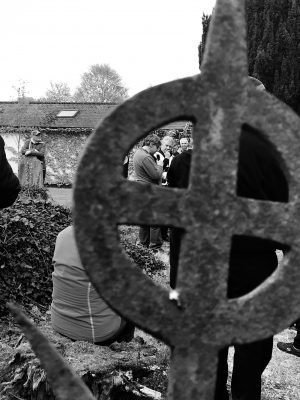 Speaking to CatholicIreland.net, Brenda Drumm, Chairperson of Newbridge Parish Pastoral Council, commented, “An anniversary like this does not come around that often so it was important for the parish to come together to celebrate our patron Saint Conleth because he represents so much about the faith history not just in our parish but across the diocese.”

She stressed that while it was a celebration in Newbridge parish, it was also a diocesan-wide event.

She described the weekend as “joyful, hopeful, faith-filled”.

“People were uplifted by the opportunity to come together to celebrate the vibrant parish that we have in Newbridge in 2019 both at the Mass with Bishop Denis Nulty on Saturday night and for the Pilgrim Walk on Sunday,” Ms Drumm said.

She added that people were “surprised and delighted” by the message from Pope Francis.

“It was particularly lovely to see the reaction from the children who are preparing for First Communion this year in our parish and their families, who had joined us with their families for the Mass.”

The Communications and Media expert said events like St Conleth 1500 serve as “important reminders of the faith history of our parish and our diocese and they also offer us a necessary moment of pause as we reflect on where we have come from as well as giving us much hope and encouragement for the future.”

While living in seclusion at Old Connell on the River Liffey in what is now Newbridge, Conleth was persuaded by St Brigid to make sacred vessels for her convent.

Conleth, Tassach of Elphin (St Patrick’s craftsman), and Daigh (craftsman of Kieran of Saigher) were acclaimed the “three chief artisans of Ireland” during their period. Conleth was head of the Kildare school of metalwork and penmanship.

According to Brigid’s biographer Cogitosus, a community of monks grew up which, under Conleth’s guidance, excelled in the making of beautiful chalices and other metal objects needed in the church, and in the writing and ornamentation of missals, gospels and psalters.

A product of St Conleth’s metalwork for which he is noted is the crozier that he fashioned for St Finbarr of Termonbarry.

Conleth later acted as priest for St Brigid’s monastic community in Kildare. The Diocese of Kildare appears to have been founded around 490 by Conleth who, with the assistance of St Bridget, then presiding over the monastery, erected the cathedral and became first bishop.

Cogitosus, in his Life of Brigid, calls him “bishop and abbot of the monks of Kildare”.

Legend tells us that Conleth died when he was attacked by wolves in the forests of Leinster on pilgrimage to Rome on 4 May 519 and he was buried nearby.

In 799 his relics were transported and laid beside Brigid’s in the great cathedral in Kildare. His relics were finally laid to rest in Connell in 835 to protect the inhabitants from invading Danes.

Conleth is the patron saint of St Conleth’s Parish, which includes Newbridge and the surrounding areas. Old Connell – the site of Conleth’s original cell, which is now a graveyard – is within the parish limits.