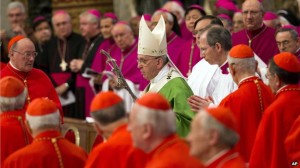 “Synod gatherings are not meant to discuss beautiful and clever ideas, or to see who is more intelligent,” Pope Francis warned his cardinals and bishops on Sunday at the opening Mass of the Extraordinary Synod on the Family.

In his homily to formally commence the landmark assembly of 253 prelates and a few laity who will discuss the challenges to the family, the Pontiff said the Synod was an opportunity to “work generously with authentic freedom and humble creativity.”

He also urged the participants not to impose “intolerable moral burdens” on believers.

Synod Assemblies, Pope Francis said, are meant “to better nurture and tend the Lord’s vineyard, to help realise his [God’s] dream, his loving plan for his people.”

He said the prelates were being asked to care for the family, which has been from the beginning an integral part of God’s plan for humanity.

“We are all sinners and can be tempted to ‘take over’ the vineyard, because of that greed which is always present in us human beings,” the Pope reminded the members of the curia and representatives of bishops’ conferences from around the world.

The papal rebuke will have resonated with a number of high profile cardinals who challenged each other publicly ahead of the Synod on the issue of communion for divorced and remarried Catholics.

The Pope continued, “God’s dream always clashes with the hypocrisy of some of his servants. We can ‘thwart’ God’s dream if we fail to let ourselves be guided by the Holy Spirit.”

He added, “The Spirit gives us that wisdom which surpasses knowledge, and enables us to work generously with authentic freedom and humble creativity.”

He urged his “Synod brothers” to do a good job of nurturing and tending the vineyard, and keep their hearts and minds on Jesus Christ.

“In this way our thoughts and plans will correspond to God’s dream: to form a holy people who are his own and produce the fruits of the kingdom of God,” he concluded.

After the Mass, during the Angelus with pilgrims in St Peter’s Square, Pope Francis asked for prayers for all those taking part in the Synod.

He also encouraged all families to keep a Bible in their homes and read it often.

“For the family to be able to proceed well, with trust and hope, it must be nurtured by the Word of God” he said.

The synod will last two weeks and no immediate changes are expected. Participants are due to reassemble in Rome next year for a second session.