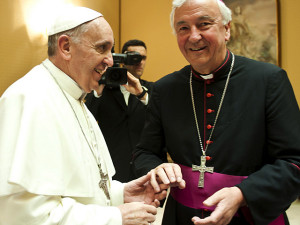 Nineteen new cardinals were named by Pope Francis on Sunday including Archbishop Vincent Nichols of Westminster.

Sixteen of the nineteen are under the age of 80 and therefore eligible to vote in a conclave as cardinal electors.

Among the three over 80 who are ineligible to vote in a conclave, Pope Francis named Archbishop Loris Capovilla (98), Pope John XXIII’s secretary.

Pope Francis announced the list of new cardinals at the end of the Angelus as he looked down on the tens of thousands of pilgrims assembled in St Peter’s Square.

The nineteen will be elevated to the cardinalate on 22 February in Rome.

In a much anticipated announcement of his first selection of those who will elect his successor, the Pontiff made a number of choices which indicate how the Church’s axis is shifting away from Europe and North America towards the majority world.

Just one North American was named, Archbishop Gerald Lacroix of the Canadian diocese of Quebec. Archbishop Vincent Nichols was a not unexpected choice as there is no voting cardinal in the church in England and Wales since Cardinal Murphy O’Connor turned 80.

The selection of Archbishop Gualtiero Bassetti of Perugia means that that central Italian diocese will be headed by a cardinal for the first time since 1846 when it was led by the future Pope Leo XIII.

Pope Francis’ willingness to break with protocol in some areas had lead some commentators to speculate that he might break with tradition in relation to the overall number of 120 cardinal electors. It had been speculated that the Pontiff might decide to choose more than the number necessary to reach 120.

However, on Sunday, Pope Francis kept with tradition and selected a number sufficient to bring the body of cardinal electors up to 120.

Following Sunday’s papal announcement, Archbishop Vincent Nichols of Westminster issued a statement in which he said he was “deeply moved by the honour conferred upon the Catholic Church in England and Wales and on the Diocese of Westminster in my appointment as Cardinal by His Holiness Pope Francis.”

He said the appointment enabled him, on behalf of all, to serve the Pope in a direct and prolonged way.

Archbishop Vincent is the 11th Archbishop of Westminster to be named as Cardinal. He will receive the red hat on the Feast of St Peter in Rome at the next consistory of cardinals.

Born in Crosby, Liverpool, on 8 November 1945, Archbishop Nichols studied for the priesthood at the Venerable English College in Rome from 1963 to 1970, gaining licences in philosophy and theology at the Gregorian University.

He was ordained priest in Rome on 21 December 1969 for the Archdiocese of Liverpool.

In January 1984, he was appointed general secretary of the Bishops’ Conference in England & Wales.

From 1989 to 1996 he was moderator of the Steering Committee of the Council of Churches for Britain and Ireland.

He was named Archbishop of Birmingham in February 2000 before returning to Westminster in 2009 as Archbishop, taking over from Cardinal Cormac Murphy-O’Connor, who had reached the retirement age of 75.

He was elected President of the Catholic Bishops’ Conference of England and Wales by unanimous acclamation on 30 April 2009.