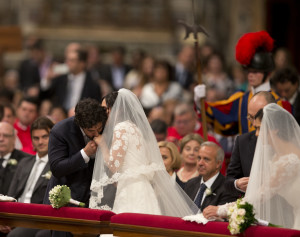 The pontiff was speaking at a Mass where he presided over the marriage of 20 couples from the diocese of Rome in St Peter’s Basilica on Sunday.

The brides and grooms included some who had been living together.

One man’s previous marriage had been annulled, while one of the women had a child from a previous relationship.

This was the first marriage Pope Francis has conducted in his 18-month papacy. The last wedding to be presided over by a Pope took place under St John Paul II in 2000.

During his homily, Pope Francis reminded the couples that marriage is “a demanding journey, at times difficult, and at times turbulent”.

He described marriage as a symbol of life, “real life: it is not fiction!”, he underlined.

Elsewhere in his homily, the Pope said it was impossible to quantify the strength and depth of humanity contained in a family and he pointed to the mutual help, educational support, relationships developing as family members mature, the sharing of joys and difficulties.

Families, he said, are the first place in which we are formed as persons and, at the same time, the “bricks” for the building up of society.

Acknowledging the tensions which marriages can suffer, he said some married couples “become impatient” with conjugal and family life.

“The hardship of the journey causes them to experience interior weariness; they lose the flavour of matrimony and they cease to draw water from the well of the Sacrament. Daily life becomes burdensome, even “nauseating”, he admitted.

The cure which God offers the people this applies to, in a particular way, to spouses who “have become impatient on the way” and who succumb to the dangerous temptation of discouragement, infidelity, weakness, abandonment… is Jesus, he explained.

“God the Father gives his Son Jesus, not to condemn them, but to save them: if they entrust themselves to him, he will bring them healing by the merciful love which pours forth from the Cross, with the strength of his grace that renews and sets married couples and families once again on the right path,” Pope Francis said.