Legalising drug use will not help addicts Pope warns 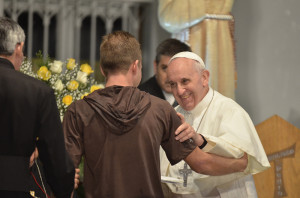 Pope Francis has taken a strong stand against the legalisation of drugs, dismissing arguments that claim decriminalisation would help reduce drug-related criminality.

He was speaking at the 500-bed Hospital Sao Francisco de Assis na Providencia de Deus (St Francis of Assisi of the Providence of God Hospital) in Rio de Janeiro.

The centre caters for drug- or alcohol-dependent patients and provides free medical and surgical assistance for indigenous peoples.

Underlining the need to embrace those in need, the Pope said there were many situations in Brazil and throughout the world which required attention, care and love.

One of these, he said, was the “fight against chemical dependency” but often selfishness prevailed instead he suggested.

“How many ‘dealers of death’ there are who follow the logic of power and money at any cost! The scourge of drug-trafficking, that favours violence and sows the seeds of suffering and death, requires of society as a whole an act of courage,” the Pontiff said.

He then warned that a reduction in the spread and influence of drug addiction will not be achieved by a liberalisation of drug use, as is currently being proposed in various parts of Latin America.

“Rather, it is necessary to confront the problems underlying the use of these drugs, by promoting greater justice, educating young people in the values that build up life in society, accompanying those in difficulty and giving them hope for the future,” he said.

Thanking the medical staff at the hospital, the Holy Father told them their service was “precious” and he urged them to undertake it always with love.

Speaking to those “who struggle against drug addiction, and to those family members who share in your difficulties”, he said “the Church is not distant from your troubles, but accompanies you with affection. The Lord is near you and he takes you by the hand. Look to him in your most difficult moments and he will give you consolation and hope. And trust in the maternal love of his Mother Mary. … Where there is a cross to carry, she, our Mother, is always there with us, by our side”.

The Pope continued, “We must hold the hand of the one in need, of the one who has fallen into the darkness of dependency perhaps without even knowing how, and we must say to him or her: you can get up, you can stand up. It is difficult, but it is possible if you want to.”

“Dear friends, I wish to say to each of you, yours is a long and difficult journey, but look ahead, there is a sure future, set against a different horizon with regard to the illusory enticements of the idols of this world, yet granting new momentum and strength to our daily lives.”

He urged all of those present not to let themselves be “robbed of hope” and told the faithful to become “bearers of hope”.

On the third day of his week-long visit to Brazil for World Youth Day, Pope Francis visited the shrine of Our Lady in Aparecida, venerated as the patroness of Brazil, where he was greeted by a huge enthusiastic crowd. The shrine is located 260km west of Rio de Janeiro.

There, the Pontiff urged young people to shun the “ephemeral idols” of money and pleasure and cherish traditional values to help build a better world.

Meanwhile, on Thursday, Pope Francis visited Manguinhos, a sprawling shantytown in Rio de Janeiro comprised of ramshackle brick dwellings; an area which up to recently was known for its violence and drug trafficking.

“No one can remain insensitive to the inequalities that persist in the world,” the Pope told residents.

He also visited a local church serving the Varghina community and blessed a new altar there.

“Everybody, according to his or her particular opportunities and responsibilities, should be able to make a personal contribution to putting an end to so many social injustices,” he said.

The Pope then appealed to “those in possession of greater resources, to public authorities and to all people of good will who are working for social justice: never tire of working for a more just world, marked by greater solidarity!”