Pope Francis blesses new statue of Our Lady of Knock 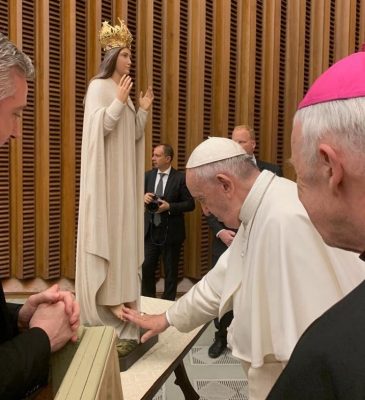 Pope Francis blesses the new processional statue of Our Lady of Knock.

A new handcrafted processional statue of Our Lady of Knock was blessed by Pope Francis in Rome last week.

The new statue of Our Lady of Knock was handcrafted by Stuflesser Studios in Ortesei, Italy – known as the European capital for woodcarving.

Rector of Knock Shrine, Fr Richard Gibbons, accompanied the statue to the Vatican audience on Wednesday where the Pope imparted his blessing and spoke briefly to Fr Gibbons.

The official unveiling of the statue on 21st August 2019 is one of the events to mark the 140th anniversary of the Knock apparitions.

A special day of celebration is planned that day with Archbishop Michael Neary of Tuam. The theme for the day is “The message of the Knock apparition, then and now.”

At 12pm a seminar will be held on the theme “19th century Mayo – place, people and the Knock apparition”, which will be given by Nollaig Ó Muraíle and Tom Neary.

Mr Ó Muraíle is an Irish scholar. He published an acclaimed edition of Dubhaltach Mac Fhirbhisigh’s Leabhar na nGenealach in 2004. He was admitted to the Royal Irish Academy in 2009.

Mr Neary served as head steward of the Knock Shrine Society for many years and is the author of many books and publications on the Knock apparition.

The Knock village model will be unveiled at the seminar. The village recreation depicts Knock village as it was in 1879. The model is filled with miniature details of the old church, the houses the witnesses lived in, schools, people, animals, roads, pathways and farmland. It offers a fascinating insight into village life in Knock and into the historical and social context of the Knock apparition.

At 7pm a “Witnesses walk – meeting heaven at harvest time” will commemorate the apparition witnesses by following in their footsteps as they made their way to the gable of the parish church on that wet August evening in 1879.

A host of high-profile speakers from the worlds of politics, media and faith are lined up for this year’s National Novena in Knock which takes place between 14th and 22nd August.

The schedule of speakers opens with former Taoiseach, John Bruton, speaking about “Faith, future and Europe” on Wednesday, 14th August.

The former Fine Gael leader served as Taoiseach from 1994 to 1997. He was also the EU Ambassador to the United States and held various other leadership and ministerial roles throughout his career.

The next day, Knock will host Archbishop Rino Fisichella, President of the Pontifical Council for the Promotion of the New Evangelisation in the Vatican.

He will speak on the theme “Mary in the life of the Church”.

On Friday, 16th August, Olive Foley, wife of the late Anthony Foley, the Munster rugby coach who died suddenly in his sleep at the age of 42 in 2016, will speak on “Family and faith”. The mother of two is an ambassador for the Children’s Grief Centre in Limerick, which offers support services for children who have lost a loved one.

Other speakers lined up for the Novena are Bishop Alan McGuckian of Raphoe who will speak on “What Knock means to me” on Saturday 17th August at 3pm.

Irish geologist, botanist, author and broadcaster Dr John Feehan will also speak on Saturday 17th August at 12pm and 8pm on “God in creation – learning to read the other Book of Revelation”.

Dr Feehan was a senior lecturer in the School of Agriculture and Food Science at University College Dublin, where he taught for 20 years up to his retirement in 2012.

In recent years he has devoted his attention more particularly to the interface between religion and science.  His book on creation spirituality, The Singing Heart of the World, won a Nautilus Book Award in 2013.

Sunday 18th August is a special family day at Knock Shrine which begins at 12 noon. Activities will include drumming, kite design, face painting and games.

At the 3pm Novena, Bishop Kevin Doran of Elphin will speak on “A joy that lies ahead of us.”

At the 8pm Novena, Msgr John Armitage, Rector of the Shrine of Our Lady of Walsingham, will speak on “Mary and the reality of family life”.

RTÉ Journalist Carole Coleman is set to addresses the Novena at 3pm and 8pm on Monday, 19th August. A former Washington correspondent for RTÉ, she is currently a presenter and reporter on This Week on RTÉ Radio One. She will speak on “Motherhood, media and me”.

Former leader of the Green Party, Rev Trevor Sargent, will speak on the theme “Faith in action” on Tuesday 20th August. Rev Sargent served as Minister of State for Food and Horticulture from 2007 to 2010 and as leader of the Green Party from 2001 to 2007. He was ordained in the Church of Ireland in 2018 and serves the parishes of the Waterford Union.

The final day of the Novena will see renowned Jesuit social justice and homeless campaigner Fr Peter McVerry speak on the theme, “Following the dream of Jesus”.